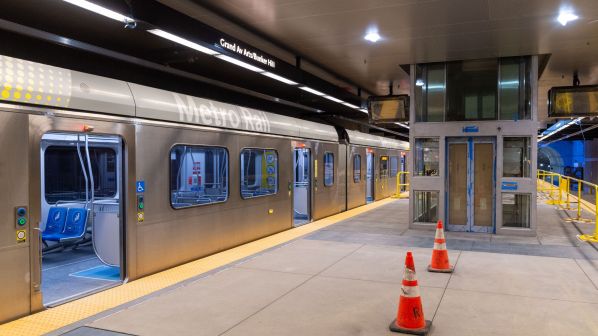 LOS Angeles County Metropolitan Transportation Authority (Metro) has reached a major construction milestone on its Regional Connector project with the completion of all tracklaying and the construction of platforms at Grand Avenue Arts/Bunker Hill station.

With train and systems testing now underway, the Regional Connector is 90% complete, according to Metro.

Once operational, the Regional Connector is forecast to be used by 88,000 passengers a day, including 17,000 new to the Metro network. Revenue service is expected to begin this autumn.

At a cost of $US 1.8bn, the new route has been designed and built by Regional Connector Constructors (RCC), a joint venture of Skanska USA Civil West California District and Traylor Brothers.

Mott MacDonald acted as the prime designer for the project that includes twin bored tunnels, a cut and cover tunnel and the first crossover cavern on the Metro system. It was also responsible for designing the three underground stations, three cross-passages and ventilation, power supply and communications systems.

Construction of Grand Avenue Arts/Bunker Hill station has been particularly complex as the platforms lie 30m below street level, making this the deepest station on the Metro network.

To mitigate the impact of noise and vibration on surrounding performing art institutions, track at Grand Avenue Arts/Bunker Hill has been laid on a floating slab.

“The Regional Connector is a game changer for the region and will offer an alternative transportation option to congested roadways, provide significant environmental benefits and spur economic development throughout Los Angeles County,” says Metro CEO, Mrs Stephanie Wiggins. “Through improved connectivity, riders will be better able to use the entire Metro Rail system, municipal bus lines and other regional transportation services, improving their experience.”

For detailed data on rail projects in LA and around California, subscribe to IRJ Pro.