The final TBM drive broke through on September 14. 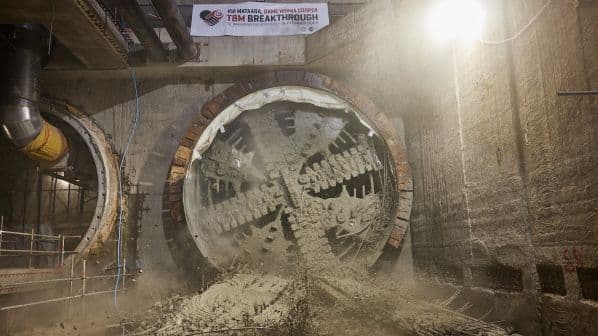 The breakthrough was completed on Wednesday evening.
Photo Credit: CRL

TUNNELLING for Auckland’s City Rail Link (CRL) has been completed following the breakthrough of a tunnel boring machine (TBM) at Te Waihorotiu station during the evening of September 14.

The CRL involves the construction of a 3.45km dual-bore underground rail link up to 42m below Auckland city centre. It will transform the terminal Waitematā station at Britomart into a through station and more than double rail capacity across Auckland. When complete, the CRL will carry up to 54,000 passengers per hour.

The Link Alliance, led by Vinci Construction Grands Projets and including another Vinci Construction subsidiary Soletanche Bachy International along with Downer, Aecom, WSP-Opus and Tonkin & Taylor, was awarded Package 3 in July 2019. Package 3 covers design and construction of the main 3.4km section of CRL including 3.2km of tunnel and three new stations. The alliance was also awarded packages 5 and 7 in October 2020.

The tunnel boring phase has included construction of two 1.6km tunnels from Mount Eden station to Te Waihorotiu station, with a TBM named Dame Whina Cooper travelling more than 3.2km, placing 2118 segment rings and removing 260,000 tonnes of spoil during the boring of the twin tunnels. Boring of the first tunnel was completed between May and December 2021, with work on the second tunnel beginning in April 2022. The TBM-bored tunnels will connect with cut-and-cover tunnels previously constructed below Albert and Lower Queen streets.

Total Stations survey instruments were used to determine the machine’s exact location to within 1mm and 0.0001 of a degree, ensuring the TBM arrived at the correct position. The machine will now be dismantled and removed by crane, before being shipped back to the manufacturer to be repurposed.

When the CRL opens in late 2024, Te Waihorotiu station will become New Zealand’s busiest railway station, overtaking Waitematā. Construction of the station began in November 2019, and the Link Alliance has since cleared utilities, built the skeleton of the above-ground superstructure, and excavated most of the station substructure. Excavation of the platform concourse continues underground and teams are working on the two Victoria Street entrances.

Te Waihorotiu station is 15m deep and 300m long with entrances at both Wellesley and Victoria streets. Itis located in the heart of Auckland’s mid-town precinct, which is undergoing a major regeneration programme. The new station will also feature a 21-storey retail, commercial, and residential tower, provisionally called Aotea Central.

CRL chief executive, Dr Sean Sweeney, said the major achievement of boring twin 1.6km tunnels up to 42m below New Zealand’s largest and busiest city was completed under the most challenging construction conditions.

“Building an underground rail network has never been attempted in New Zealand before,” Sweeney says. “To have achieved what this team of 2000 people have in the face of a global pandemic, multiple lockdowns, restricted Covid working conditions and multiple other challenges is nothing short of extraordinary.

“There is so much more to do on the CRL project, but the final breakthrough is an appropriate moment to pause and reflect on the extraordinary job our people have done in building these twin underground tunnels,” he says. “These tunnels are the cornerstone of the country’s first rapid transit rail network and will enable a transformational change in our biggest city.”

“The final tunnel breakthrough is the culmination of 13 months of hard work by the tunnelling teams,” says Auckland mayor, Mr Phil Goff. “When complete, CRL will make it faster and easier to get into and around central Auckland, immediately doubling the capacity of heavy rail and ultimately carrying up to 54,000 passengers per hour at peak times.”

For detailed data on rail projects in New Zealand and around the world, subscribe to IRJ Pro.