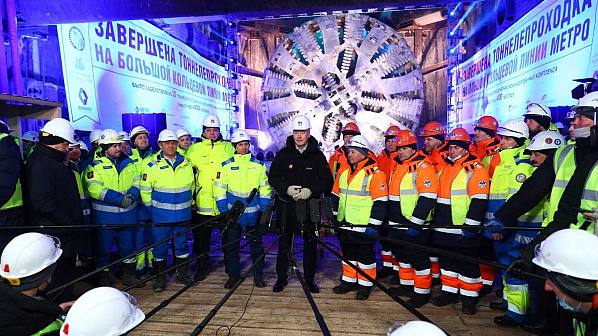 TUNNELLING on the final section of Moscow’s $US 6.79bn Big Circle Line (BCL) between Nagatinsky Zaton and Klenovy has been completed.

In less than 10 years more than 140km of tunnels have been constructed, and Moscow Metro says the full launch of the BCL is now planned for either late 2022 or early 2023. Eventually there will be 31 stations, with 22 currently already open.

Mr Maxim Liksutov, deputy mayor of Moscow, says that when fully operational it is expected that 2.25 million residents living across 34 districts will have access to the BCL.

The 21km Mnyovniki - Kakhovskaya section was opened by Russian president, Mr Vladimir Putin, via video link on December 7 2021 with 10 stations brought into use that day. Liksutov says that already 500,000 passengers are using the system per day, a figure he compared with the Moscow Central Circle (MCC) system which has 530,000 passengers per day.

The BCL is part of a programme launched in 2011 to double the length of the city’s off-street rail system including the Moscow Metro, MCC and Moscow Central Diameters. When these are complete in 2024, they will exceed a combined 1000km and add 120 new stations to the network.

The BCL is one of IRJ’s 20 projects to watch in 2022, which is published in the January edition. Digital subscribers can read the feature here.

For in-depth data on rail projects in Russia, subscribe to IRJ Pro.