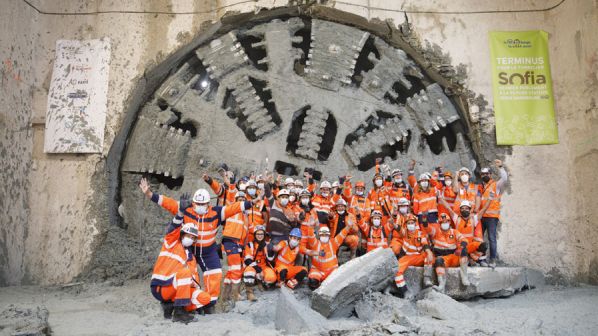 The breakthrough at the end of tunnelling on Line 11 in Paris.
Photo Credit: RATP

EXCAVATION of 3km of tunnels for the 6km extension of Paris Metro Line 11 linking Mairie des Lilas to the Rosny-Bois Perrier station was completed on July 16 when the Sofia tunnel boring machine (TBM) arrived at the site of the new Serge Gainsbourg station.

The TBM took 15 months to complete its 3km journey travelling at around 14 metres per day. The extension will have four brand new stations at Serge Gainsbourg, Place Carnot, Montreuil-Hôpital and La Dhuys. It is due to open in 2023.

In order to connect the current line and the extended line, a 250m tunnel was dug beforehand using the traditional method from Mairie des Lilas station to the future Serge Gainsbourg station. In addition, the viaduct at the new Côteaux-Beauclair overhead station and the rectangular tunnel at Rosny-Bois Perrier are also connected.

Tracklaying is underway between the new maintenance facility and new station at Rosny-Bois Perrier, construction of which has been completed. A 600m viaduct and the Côteaux-Beauclair station’s glass roof of have been installed.

Work has also been undertaken on the existing line to allow for the introduction of new Alstom MP14 Metro trains that will be formed of five cars instead of the current four.

Testing of the first MP14 five-car train is currently underway on Line 1 at night. Once this is complete it will be moved to the new maintenance facility at Rosny-sous-Bois for more tests as well as running on the last 1km of the line 11 extension.

Maintenance of Line 11 Metros will move from Les Lilas to the new Rosny-sous-Bois facility, which will be operational by the end of 2021. The depot has been built to accommodate the new, longer trains.

Funding is provided by the Paris Transport Authority (RATP) and Île-de-France Mobility. It is worth almost €1.3bn in 2014 prices.