The 15.3km Line 6-Orange is described as the largest infrastructure project currently underway in Latin America. 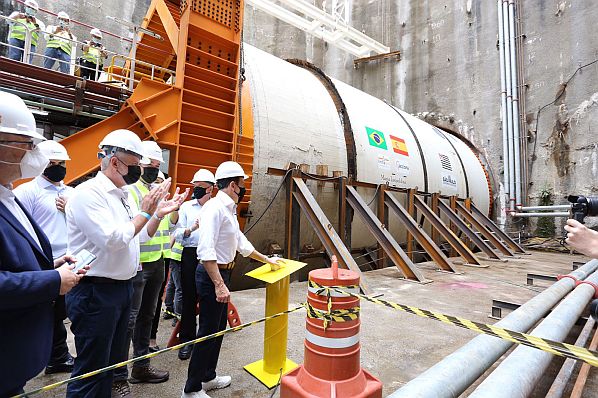 The TBM is launched on Line 6-Orange in Sao Paulo.

The 2000-tonne, 109m-long TBM has a diameter of 10.61m and will travel 10km in the coming months, covering 10 stations, between Santa Marina and São Joaquim. Drilling capacity is 12m to 15m per day, with approximately 50 people working across three shifts.

A second TBM is expected to begin operation in 2022 heading north and will cover 5.3km. There are currently 450m of drilled tunnel on the line which was completed without a TBM.

Construction of precast concrete segments used in the tunnels on the new line has also resumed at the Aduelas Factory, São Paulo. More than 60,000 will be manufactured.

The 15.3km line is due to open in 2025 and will have 15 stations. The line will connect Brasilândia in the north with São Joaquim east of the city centre, reducing current journey times from 1hr 30min by bus to 23 minutes by metro. When open, it is estimated that 630,000 passengers per day will use the line.

Construction of Line 6-Orange is regarded as the largest infrastructure project currently underway in Latin America. Acciona was awarded the contract for the civil works and systems in October 2020. This followed the cancellation of previous contracts in 2018 following a court case. The new contract is for 24 years.

The project is a public-private partnership (PPP) between the São Paulo State government and the Linha Universidade Concessionaire. When open, Line 6-Orange will be operated by Line Uni for 19 years.

An in-depth feature looking at rail’s expansion in São Paulo will be published in the January edition of IRJ.

For in-depth data on projects underway in Brazil, subscribe to IRJ Pro.