A ceremony was held in Genoa on July 21 to mark the resumption of construction on the Genoa Node element of Italian Rail Network’s (RFI) €6.9bn Terzo Valico rail project following a two-year suspension of work. 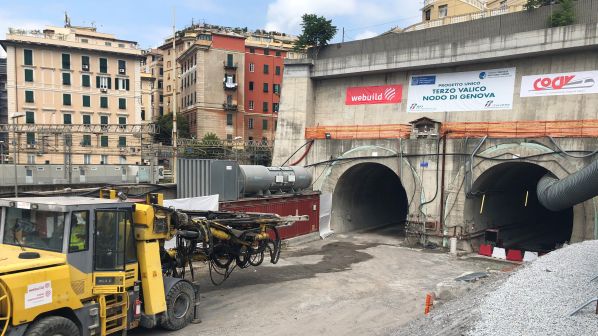 Tunnelling has resumed on the Genoa Node element of Italy's Terzvo Valico rail project following a two-year suspension of work.

Resumption of tunnelling follows the signing of a contract between RFI and the Cociv consortium led by the Webuild Group for the design and construction of the Terzo Valico dei Giovi project.

The Genoa Node scheme involves the completion of civil works on the Colombo, San Tomaso and Polcevera tunnels within 30 months at a cost of €120m. Webuild says this will accelerate work on the new 250km/h 53km line between Genoa, Novi Ligure and Tortona, which is 40% complete, and includes 37km of tunnels.

When it opens, the Terzo Valico project will cut the journey time between Genoa and Milan from 1h 39min today to 50 minutes and improve freight connections between the port of Genoa, northern Italy, and northern Europe. Terzo Valico will form part of the Rhine-Alps TEN-T corridor linking Genoa with Rotterdam, Antwerp and Zeebrugge.

For more data on rail projects, subscribe to IRJ Pro.