THE Chinese cities of Mengzi and Hohhot have opened two new lines of their public transport networks. 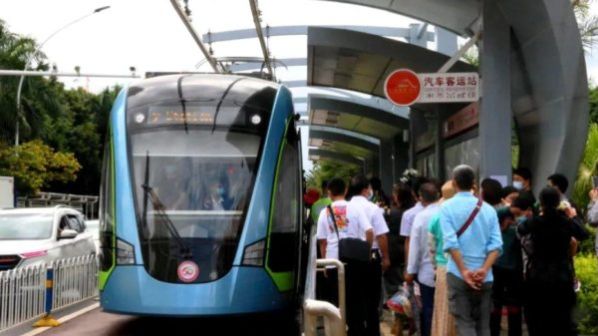 Mengzi, Yunnan Province, has begun operation of its 13km Line 1 Phase 1 light rail line, which runs north-south between Northern station, via the city centre, to the passenger bus terminal. Services will operate from between 07.15 and 21.45 at a frequency of 118 per day.

Line 1 is the first of four light rail lines planned for the city, which will have a total length of 62.3km, with an estimated total cost of Yuan 6.6bn ($US 9.72bn). In addition, Line 1 Phase 2 will extend the line a further 5km with nine additional stations planned.

The line was constructed through a private-public partnership (PPP) between Yunnan Construction Engineering Group (YCEG) and the Honghe Prefectural government, and will be operated by YCEG under a 30 year contract.

The Mengzi light rail line project was launched following a ground-breaking ceremony in August 2015, with an original opening date planned for 2017. However, the project was later delayed due to a lack of funding.

The line will be operated by a fleet of 34 low-floor LRVs supplied by CRRC, which are equipped with supercapacitors to enable operation using partial electrification, with most electrification located at stations.

Hohhot, Inner Mongolia, opened the first phase of its new metro Line 2 on the same day, following an inauguration at Xinhua Square station, where the line interchanges with the existing Line 1.

The new line is 27km long and runs north-south from Tali East Road to Aershan Road, with 24 stations. Together with Line 1, the city’s metro network now offers two lines operating on east-west and north-south axes.