The project also includes the construction of an industrial park and deep-sea port in the south of Nigeria. 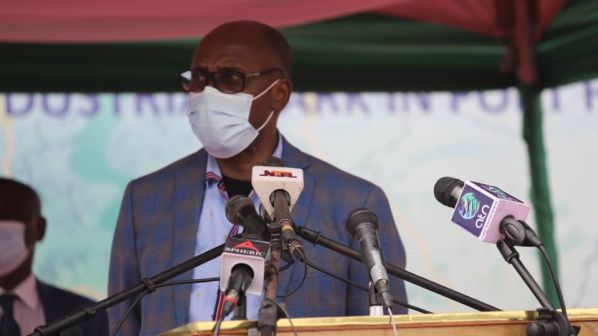 The ceremony to begin constriction was attended by Nigeria’s minister of transport, Mr Chibuike Amaechi.

THE president of Nigeria, Mr Muhammed Buhari, has virtually launched a $US 3.2bn project to reconstruct the 1443km Port Harcourt - Maiduguri 1067mm-gauge line from the south to the northeast of the country, along with new branch lines to Owerri, Imo state, and Damaturu, Yobe state.

The project also includes the construction of a railway industrial park in Port Harcourt and the development of the Bonny Deepsea Port on Bonny Island, about 50km south of Port Harcourt. The government is providing 15% of the project costs, with the remaining 85% funded through a loan from a syndicate of Chinese financiers. The project will be undertaken by the Nigerian subsidiary of China Civil Engineering Construction Corp (CCECC).

The redeveloped line will support 60-80km/h freight and 80-100km/h passenger services. The Bonny Deepsea Port will have capacity to handle 500,000 TEU per annum, allowing ships with a 100,000 deadweight tonnage to berth.

Buhari says the line is also designed to connect with under-construction standard-gauge lines in the country through the development of transhipment centres.

“The improved port is designed to be a regional and international transport hub,” Buhari says. “In line with global trends, the railway industrial park will have the capability to process exports of raw materials with value addition, and will also support the export of locally made goods.”

“The Port Harcourt - Maiduguri railway will result in the reactivation of economic activities along the Eastern corridor, which has been greatly affected by insurgent activities, and serve as a stimulus for industry and trade.

“The connection of the railway to a new seaport in Bonny Island and the industrial park in Port Harcourt is designed to increase the viability of trans-shiping cargo and freight locally, across the West African sub-region and in the Continental Free Trade Area.”

Amaechi says efforts to rehabilitate the Port Harcourt - Maiduguri line between 2009 and 2012 were unsuccessful, partially due to inadequate funding and the incompetence of some of the contractors employed. “The rail line, therefore, remains unserviceable,” he says.

The line played a significant role in the development of agriculture and industrial sectors in Nigeria’s colonial era and immediate post-independence period, Amaechi says, until it became unfit for purpose in 1985 as a result of the general neglect and divestment suffered by Nigerian Railways.