The line will double capacity between Messina and Catania. 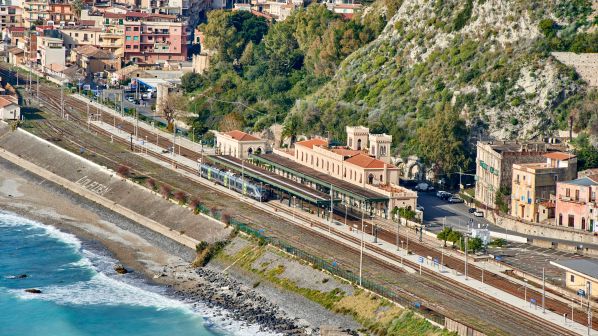 A new underground station will be built in Taormina as part of the project.
Photo Credit: Shutterstock/ZONARANCIONE

ITALIAN Rail Network (RFI) has awarded a Webuild-led consortium a €1.003bn contract to construct a new 28.3km double-track line between Giampilieri and Fiumefreddo, which will double capacity between Messina and Catania on the island of Sicily.

Webuild has a 70% stake in the consortium awarded the contract, known as the Second Functional Taormina-Giampilieri Lot, with the remaining 30% held by Pizzarotti.

The new alignment will split from the existing single-track, electrified line at Fiumfreddo before re-joining it at Giampilieri. The majority of the new line will run through tunnels, further away from the coast than the existing line.

The new line will be combined with upgrades to the Fiumefreddo - Taormina - Letojanni section to complete track doubling of the Messina - Catania line.

The contract includes civil and related works such as electrification, signalling and communications, as well as the construction of two single-bore tunnels, six dual-bore tunnels and seven viaducts.

The single-bore Nizza and Alì tunnels will be 492m and 144m long respectively. The dual-bore tunnels include Taormina (2134m-long), Letojanni (3866m), Forza d'Agrò (2467m), Sciglio (9259m), Quali (4187m) and Scaletta (2735m). The tunnels will be bored using traditional methods, except for the Sciglio tunnel which will be excavated with a tunnel boring machine.

A hub will be built at Fiumefreddo, along with a new underground station at Taormina and five new above-ground stations. The line will still run through Letojanni station.

For detailed data on rail projects in Italy and around the world, subscribe to IRJ Pro.