Work begins on new section of Brenner Base Tunnel

Contract is for the Gola del Sill – Pfons section of the world’s longest rail tunnel. 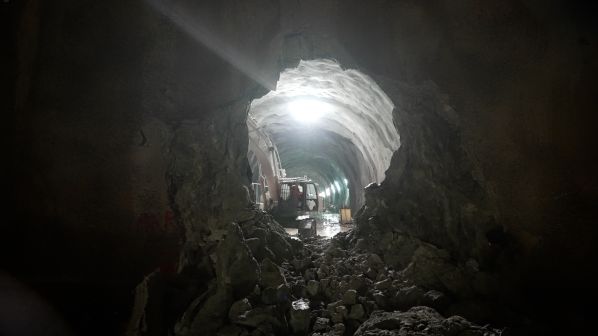 A section of the Brenner Base Tunnel under construction.
Photo Credit: Webuild

WORK has officially begun on the Gola del Sill – Pfons section of the Brenner Base Tunnel, one of the largest sections of what will become the world’s longest rail tunnel at 64km.

Commissioned by Brenner Base Tunnel (BBT SE), the organisation which is overseeing the tunnel project, the section is being built by Webuild of Italy and its Swiss subsidiary CSC Costruzioni with 50:50 joint-venture partner Implenia.

Work on the section, which will create up to 400 direct jobs and more than 1000 indirectly, involves the construction of a new railway from Gola del Sill, near Innsbruck, southwards to the town of Pfons.

Under the €651m contract signed in November, two 7.3km-long parallel tunnels will be built using traditional excavation methods, including two auxiliary tunnels, along with two 16.5km tunnels using two 10m-high tunnel-boring machines (TBMs). The contract also includes lining the tunnel walls and the creation of an underground emergency station at Innsbruck, access, exploratory and secondary tunnels, and the building of a bridge over the A13 highway.

Sustainable construction methods are a key part of the contract, with the work sites planned to reduce the distance materials must be moved. There will also be measures put in place to reduce dust and noise caused by construction vehicles, and any water used will be treated to remove contaminants before being returned to the environment.

Connecting Italy and Austria, the Brenner Base Tunnel beneath the Alps will form part of the Scandinavian – Mediterranean corridor of the Trans-European Transport Network (TEN-T).

Emphasising the project’s importance to Austria and Europe was the fact that the ground-breaking ceremony was attended by Austrian federal minister for climate action, environment, energy, mobility, innovation and technology, Ms Leonore Gewessler, and Mr Pat Cox, European coordinator for the TEN-T Scandinavian – Mediterranean Corridor.

Webuild is also working on other sections of the Brenner Base Tunnel, including the Isarco River Underpass and the section of line between Fortezza and Ponte Gardena in Italy. It has also built the Tulfes – Pfons section on the Austrian side of the Alps.