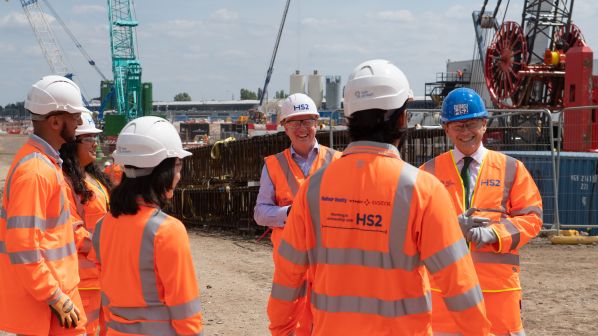 The formal 'go-ahead' for the construction of the 'superhub' station at Old Oak Common, west London, has been given.
Photo Credit: HS2 LTD.

BRITAIN’s secretary of state for transport Mr Grant Shapps formally gave the go-ahead for work to start on the HS2 ‘superhub’ station at Old Oak Common in west London on June 23.

When it’s finished, the station will have 14 platforms, with six for HS2, four for Crossrail and four for the conventional Great Western network to Wales and southwest England.

Work will now begin on building a 1.8km underground wall around what will become the station’s ‘underground box’ where six high-speed platforms will accommodate trains running between London, the West Midlands, northern England and Scotland.

Some 160 reinforced concrete columns will be installed inside the wall to help form the box and support the structure.

"Old Oak Common marks yet more progress in delivering HS2, the high-speed, high-capacity and low-carbon railway that will form the backbone of our national transport network,” Shapps says.

Once the first phase of construction to create the 750,000m3 box is complete, work will begin on building the eight surface platforms. More than 1600 concrete piles will be installed in the ground on which the station superstructure and surface platforms will sit.

“The start of permanent works at Old Oak Common station, our first station under construction, is a significant step for Phase One of HS2, as we deliver world-leading engineering to create what will arguably be one of the best-connected railway super-hubs in the UK,” said HS2 Ltd CEO Mr Mark Thurston.