Rail can be a winner of the Fourth Industrial Revolution

IRJ at InnoTrans 2018: GERMAN Rail (DB) hosted a high-level debate and presentations on the third afternoon of InnoTrans at the DB Innovation Forum, which addressed the theme of shaping intermodal mobility together. 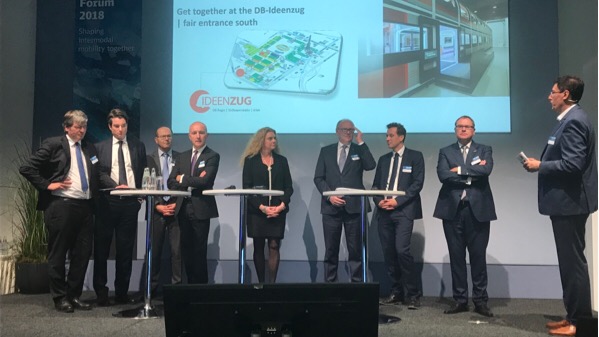 In her keynote address, professor Ms Sabina Jeschke, DB’s board member for digitalisation and technology, set the scene for the debate by outlining the four major challenges she said DB faces: capacity, complexity, Human Resources and speed of innovation.
Jeschke was keen to stress that the the fourth industrial revolution can benefit DB and help the railway to thrive in the 21st century by solving many of its underlying issues.
For example, new intelligent technologies and systems based on AI can solve maintenance problems, which are responsible for 50% of DB’s issues with quality. New technologies can also help to overcome the problem of capacity without expensive and time-consuming investments in new infrastructure.
To take advantage, Jeschke called on DB to come up with new data strategies. She said DB currently has 2500 databases most of which are separate with limited sharing or interaction taking place. Instead she said DB should adopt a “data lakes” strategy, pioneered by companies such as Facebook and Google, to use and bring data together in a data loop.
Jeschke concluded her address by reflecting on new developments in computing and the end of the era of Moore’s law, which she said has defined computing for the past 40 years. Quantum computing promises to open new opportunities for industry and Jeschke said it is her dream to utilise this technology to create a “digital twin” of DB. “This will enable us to test and prove new technologies and come up with realistic solutions to complex problems,” she said.
Also addressing the challenges the sector faces with securing innovation, Dr Josef Doppelbauer, executive director of the European Union Agency for Railways, said that the emphasis should be on “soft innovation” and securing quick wins on existing infrastructure to overcome rail’s typical 25-year innovation cycle.
He said that while the sector has great ideas and innovations, epitomised by the solutions on show at the vast exhibition, fragmentation and an absence of global rules is holding the industry back from achieving its potential.
Doppelbauer argued that rail should “mainstream” its approach to innovation, emphasising seven points which he feels are critical to success:
Generally the tone of the discussion was positive. Speakers seemed optimistic that rail could deliver and highlighted a number of initiatives and projects underway.
Among them is the Shift2Rail joint technology initiative, which the organisation’s executive director Mr Carlo Borghini said would only be a success if it could deliver solutions to the market. Some early demonstration projects are already showing significant promise and Mr Philipe Citroën, director general of the European Railway Industry Association (Unife) pointed out that momentum is building for Shift2Rail 2. This, and a continuing research cycle, Jeschke argues could form the basis for a faster innovation cycle in the future.
Automatic Train Operation (ATO) on main line infrastructure was praised for delivering up to a 30% improvement in energy efficiency almost instantly and using technology already widely available. However, the experience with the deployment of ETCS in Europe over the past 20 years, and the minimal roll out in Germany, shows the difficulties rail continues to face to realise its potential and deliver true innovation. It also emphasises the fragmentation in place in the sector.
For Jeschke, this has to change. “We cannot go as we are now,” she said. “If we are to run the trains on time with more passengers, how do we do that? We need innovative ideas to fix the back end system. We also need greater flexibility and can’t count on current systems for this. Instead we have to come up with new innovative solutions to deliver the small steps. The more ideas we can deliver will help to realise the potential on offer.”
Categories: Europe, InnoTrans 2018, News, Technology
Tags: ATO, DB, Germany, innovation