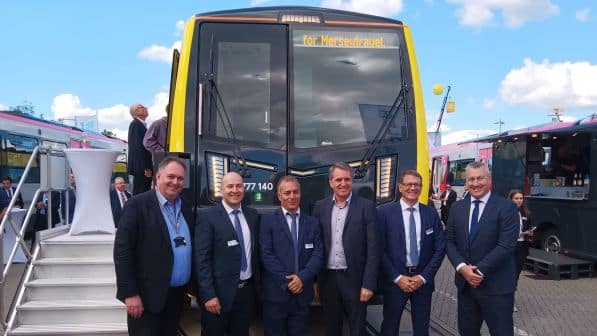 The first Stadler IPEMU for Merseyrail at InnoTrans.

STADLER has presented the first of seven Independently Powered EMUs (IPEMUs) that it is building for British commuter operator Merseyrail as part of an order for 53 four-car class 777 EMUs which are due to enter service from November.

The new articulated fleet has been purchased by the Liverpool City Region Combined Authority, whose transport arm Merseytravel manages the 25-year Merseyrail operating concession, held by Serco and Abellio.

The seven IPEMUs are equipped with batteries for operation on non-electrified lines, which can be charged when operating on Merseyrail’s 750V dc third rail network and during regenerative braking.

In the depot, batteries can be charged in 15 minutes to provide sufficient current to operate for 50km at speeds of up to 100km/h compared with 120km/h in third rail mode. The batteries are capable of more than 10,000 charge/discharge cycles.

According to Mr Ralf Warwel, sales manager for UK and Ireland at Stadler, the IPEMU is the first train of its kind to enter service in Britain.

Each IPEMU has 184 seats, space for 302 standing passengers and at-seat charging points for mobile devices. Retractable ramps below the passenger doors provide level boarding at all stations.

The first IPEMUs are expected to enter service early next year, to serve a new station at Headbolt Lane on the Kirkby – Wigan Wallgate line, beyond the current limit of third rail electrification at Kirkby where passengers to and from Liverpool are currently obliged to change trains.

“The IPEMU concept has been an integral part of our strategy for the new Liverpool City Region train fleet,” says Mr David Powell, programme director at the Liverpool City Region Combined Authority. “We are delighted to be one step closer to realising our vision of an extended Merseyrail network without electrification infrastructure.

“This will provide significantly improved, high-quality service and direct connections to a larger proportion of the 1.6 million people in our metropolitan area. The IPEMUs will also contribute to our strategy to reduce carbon emissions, as they use only 20% of the energy of the diesel-powered trains they can replace.”

For more data on fleet orders around the world subscribe to IRJ Pro.