The future of mobility in times of climate change 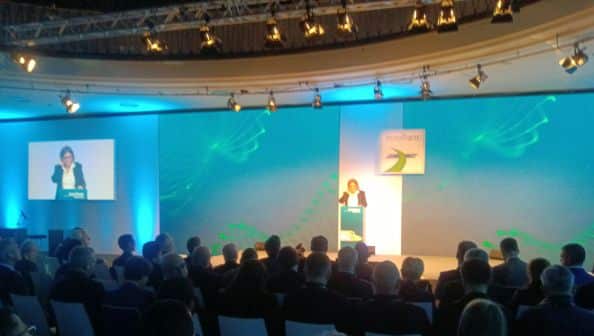 THE official opening ceremony for InnoTrans 2022 in Berlin on September 20 addressed the trade fair’s theme - the future of mobility in times of climate change - following the welcoming speech from Mr Martin Ecknig, CEO of InnoTrans organiser Messe Berlin.

The invited guests were then addressed by European commissioner of transport, Ms Adina Vălean, who highlighted the role of rail in the conflict in Ukraine and, looking to the future, the key part it will play in helping the European Union (EU) to become carbon-neutral by 2050.

Vălean also threw down the gauntlet, as much still has to be done to provide infrastructure adequate to meet the growing demands on rail and improve the service provided to the customer.

The crucial importance of a reliable and resilient rail network was stressed by German transport minister, Dr Volker Wissing, who noted that the country’s railway network was now facing major challenges, including the impact of the war in Ukraine and the increase in energy prices.

Indeed, Wissing reported that one freight operator had been forced to resort to more polluting diesel traction after their traction electricity costs had increased by 1000%.

As Russia restricts gas supplies, the German rail network is carrying more coal and fuel, but on infrastructure that is not performing well due to the large number of upgrade programmes currently in progress.

“Without fuel transport, we would come to a standstill in all walks of life,” Wissing said. “Neglecting infrastructure can have fatal consequences. That is why I am in favour of having reliable infrastructure as part of our national strategy.”

Work to improve the reliability and resilience of the German Rail (DB) network will focus on 10 key corridors. “Everything will be done in one well swoop with just one full route closure,” said Wissing.

Building new lines was not the only way to increase capacity, the minister said, noting the potential of digitalisation to run more trains on existing routes, notably through the rollout of ETCS.

Both were asked to explain the importance of another major European rail digitalisation initiative, the Digital Automatic Coupler (DAC).

Lutz said that the DAC “has been discussed for decades but not implemented until now.” “We are at the point where we know what we need and what we want, he said.”

For the DB CEO, adopting this new technology is vital to safeguard the future of wagonload freight traffic and grow rail' s market share in line with European Union (EU) environmental objectives. "All freight operators need to invest in this and we need to share the costs across Europe," said Lutz.

Krapinec was blunt in his assessment. "It's all about money," he said. "The cost of equipping 20,000 freight wagons is inconceivable for us, it's incredibly expensive and we would need support from the European Union."