ATO at Grade of Automation 4 removes the need for onboard staff. 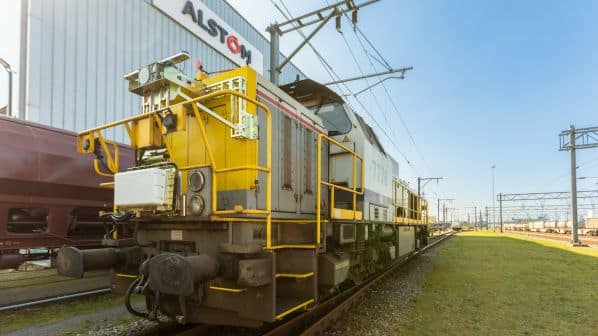 ALSTOM has demonstrated for the first time the deployment of ATO at Grade of Automation (GoA) 4 on a shunting locomotive, enabling it to operate and detect obstacles without the direct involvement of onboard staff.

According to the manufacturer, autonomous driving in shunting applications offers the potential to both increase the capacity and reduce the cost of freight operations.

The demonstration was conducted near Breda in the Netherlands on November 29, in partnership with infrastructure manager ProRail and freight operator Lineas which supplied the diesel-hydraulic locomotive used in the trials.

The locomotive has been equipped with Alstom ATO technology which interfaces with an intelligent obstacle detection and recognition system (ODS). The ODS has been developed by Niart by Elta, which specialises in sensor, radar and communications for land and aerospace applications.

The ODS combines high-resolution digital radar, multi-spectral electro-optics and machine learning algorithms to detect and identify obstacles. Alstom says that it is a complete, self-contained onboard solution able to provide the ATO system with the information it needs to make autonomous driving decisions.

By combining radar with a wide range of sensors, including light spectrum and infrared cameras for long, short and very short distances, “the ODS can detect objects even when visibility is limited, in bad weather but also at night or when the sun is low,” Mr Stéphane Feray-Beaumont, vice president of innovation and smart mobility at Alstom, told IRJ.

“The radar is the real differentiating factor,” Feray-Beaumont says. “It scans the path ahead as fast as 200 times a second and utilises high-resolution imaging techniques to analyse the scene and detect obstacles far ahead, even when the visibility for optic-based systems is severely degraded.”

The locomotive was presented during the demonstration with obstacles on the track including a person, a car and a wagon for coupling, as well as a set of points that were in the incorrect position. The ODS proved to be effective up to 500m from obstacles in real-world conditions, providing a significant safety margin for shunting operations.

“In this demonstration, which is effectively a proof of concept of the requisite obstacle detection for shunting operations, staff were onboard the locomotive in order to intervene in case of any malfunction, and there were no malfunctions,” Feray-Beaumont says. “Further down the line, a control centre will do it, programming the train’s movements and following a rigorous safety procedure.”

“For now we have demonstrated the power of perception and recognition technologies – in this case, radar and artificial intelligence - and the way they can interface smoothly with automatic driving systems.”

The combination of ATO and ODS will enable shunting locomotives operating at GoA4 to react to unexpected situations without any human input, “even at distances or in conditions that would be difficult for a human,” Feray-Beaumont says. “We have demonstrated that GoA4 operation is suitable for shunting.”

The next step in the project will be to carry out formal testing in day-to-day shunting operations. The final report will be published in early 2023.

Feray-Beaumont points out that regulations for fully autonomous train operation on main line networks are still being developed. “We will wait for the specifications for GoA4 issued by the European authorities to finalise our system and have it approved by railway bodies. We can expect to have a validated solution in 2023.”