57 trains are operating in Baden-Württemberg on fuel producing 90% fewer CO2 emissions than diesel. 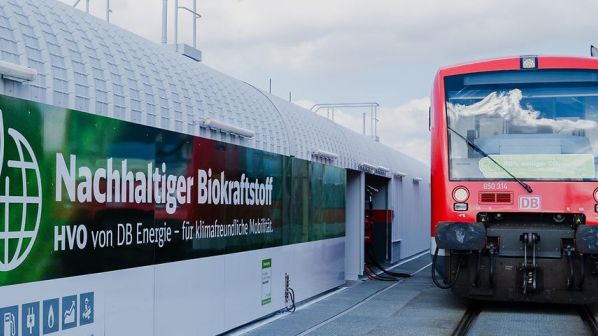 GERMAN Rail (DB) and the state of Baden-Württemberg are now operating 57 DB Regio trains that use environmentally-friendly biofuel on the Aulendorfer Kreuz and Donau-Ostalb networks.

The biofuel being used is hydrotreated vegetable oil (HVO) and consists of biological residues and waste and is also free of palm oil, meaning there is no competition with the production of food and animal feed. In March DB Cargo announced that extensive tests had shown that its existing diesel main line and shunting locomotive fleets would be able to run on HVO when hauling trains of up to 3000 tonnes for in last-mile operations at private sidings, ports and freight terminals.

Diesel trains operating on non-electrified routes in Baden-Württemberg will not have to be specially converted to use the biofuel but can continue to be used until the end of their working lives, operating in a more environmentally friendly manner. This will help save resources and improve sustainability.

DB has converted the refuelling point at Aulendorf from diesel to biofuel and DB Group representative for the state of Baden-Württemberg, Mr Thorsten Krenz, and Baden-Württemberg minister of transport, Mr Winfried Hermann, were present on September 1 to refuel the first regional train to be powered by the new fuel. The refuelling point is also available for use by other operators.

“For us, the use of biofuel is an immediate climate protection measure,” says DB’s head of regional transport, Ms Evelyn Palla. “Together with the state of Baden-Württemberg, we are taking an important step towards phasing out diesel and climate neutrality. By December 2023, we will save around 3700 tonnes of CO2 on the two networks.”

“Trains should no longer run on climate-damaging diesel,” says Hermann. “We are therefore working nationwide on a strategy to get away from diesel fuel. Where electrification is not yet possible, we will rely on alternative fuels. From today, the diesel vehicles operating here in Upper Swabia will have a significantly lower CO2 footprint. The state of Baden-Württemberg is supporting these measures in 2022 and 2023 with a total of €400,000.”