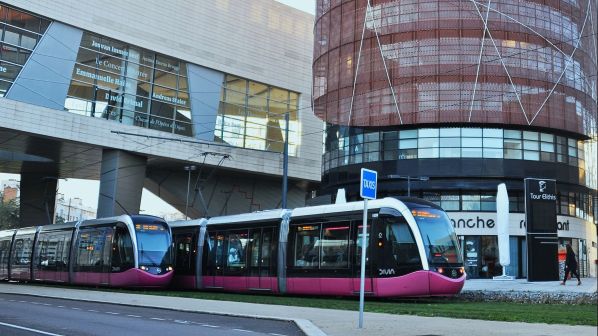 DIJON Métropole, the public transport authority for the greater Dijon area in France, has renewed its operating contract with Keolis which will see the operator apply its “global mobility” strategy.

Dijon has been rolling out its global mobility plan since 2017 with the aim of facilitating travel within the metropolitan area while encouraging passengers to use environmentally-friendly public transport such as light rail, buses, bikes or walking rather than the private car.

Keolis says that its contract with Dijon is the first of its kind in France, grouping together operation of public transport, car parks and cycling services combining shelters and bike hire under the Divia Mobilités brand. Divia Vélo Park is a system of secure shelters where cyclists can leave their bikes while using public transport.

The new contract will begin on January 1 2023. Two light rail lines form the core of the network. The first to open was the 17-station Line T1 running 8.5km from Dijon's principal railway station in the west to Quetigny Centre in the east, which entered service in September 2012.

This was closely followed by the 11.5km Line T2 linking a park-and-ride facility at Valmy with the city centre and Chênove. Keollis has operated both routes since their opening with a fleet of Alstom Citadis 302 low-floor LRVs.

Among the initiatives launched by Keolis has been a MaaS (Mobility as a Service) app, combining all the public transport options for the Dijon area from  booking tickets to journey planning and checking real-time timetable updates.

"On our app, users can get around more easily by saving lines, stations and car parks to their favourites, reporting a problem and even paying a fine directly," says Keolis. "Our app is constantly evolving, with new features added regularly."

Other initiatives include an open payment system, first introduced in 2018, allowing transport users to pay for and validate their tickets using their smartphones; a voice assistant using artificial intelligence to provide personalised answers to enquiries; and the Bouquet Libertés scheme offering combined packages such as all-day parking in a Keolis car park and a free travel on public transport.

Under the newcontract, Keolis will help the city achieve its public transportgoals by increasing the provision of public transport, particularly to key attractions Network performance will also be optimised with new transport-on-demand services and multimodal tickets will be extended across the network.

Keolis also plans to modernise the ticketing system, enabling all Divia Mobilités tickets and passes to be bought and topped up directly from a smartphone. A single passenger account incorporating customer profiles, purchases and favourites aims to make public transport simpler to use. Provision of travel information will also be improved, with better integration of all modes – including walking – within the journey planner and real-time information on disruption to services. These new features will be available on the Divia Mobilités website and mobile app.