InnoTrans is back with a bang in 2022

Over 250 innovations to be displayed for the first time. 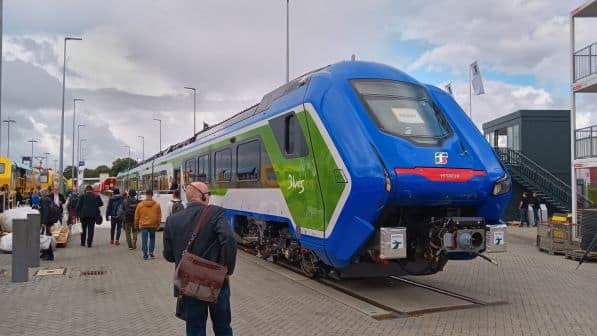 Hitachi Rail is presenting its Blues tri-mode train for Trenitalia

THE world’s largest railway trade fair is being held in Berlin for the first time since 2018, and visitors can look forward to a bumper crop of innovations as over 250 technologies and new rolling stock designs make their world premiere.

“InnoTrans is back,” says Mr Martin Ecknig, CEO of InnoTrans organiser Messe Berlin, “and I’m absolutely delighted to welcome you all in person in Berlin.”

“Nothing comes close to meeting in person, seeing old friends again and making new contacts,” Ecknig says. “No video presentation, regardless of how well made, can replace seeing, hearing, smelling and even testing products at the event.“

A total of 2834 exhibitors from 56 countries are taking part in InnoTrans 2022 and occupy the entire Messe Berlin exhibition site. There are 42 exhibition halls and InnoTrans covers a total area of 200,000m2, including 3.5km of track in the external display area where 124 railway vehicles will be on show.

On September 20, the European Railway Industry Association (Unife) will be unveiling the findings of the 2022 World Rail Market Study, undertaken in partnership with management consultancy Roland Berger.

Pointing to the results of the study, Citroën predicts that global initiatives to tackle climate change, such as the European Union (EU) target to be carbon-neutral by 2050, “will have a beneficial effect on the demand for rail.”

Also on September 21, rolling stock manufacturer Pesa will be signing an agreement with PKN Orlen, with which it has collaborated on the development of a mobile refuelling system for its SM42-6Dn hydrogen-powered shunting locomotive which, according to Pesa, is the first of its kind to be produced in Europe.

The SM42-Dn and its mobile refuelling unit are on show at the external display area, where fellow rolling stock manufacturer Stadler has a substantial presence and will present a number of new trains during InnoTrans.

These include the Flirt H2 multiple-unit for the San Bernadino County Transportation Authority in California, which Stadler says is the first hydrogen-powered train to be manufactured for the US passenger market. Stadler will also unveil new EMUs for Merseyrail in Britain and the battery-powered Flirt for the NAH.SH network in Schleswig-Holstein, Germany.

Another world premiere in the field of sustainable, climate-friendly traction will take place on September 21, when Hitachi Rail and its customer, Italian state passenger operator Trenitalia, will unveil Blues, a tri-mode multiple-unit for regional services that can run on electric, diesel or battery power.

IRJ’s editorial team is in Berlin all week. Stay up-to-date with the key events throughout InnoTrans by reading our Live Blog from the show and following us on social media @railjournal.