Europe’s railways are making strides in use of wind and solar power and helping the environment. 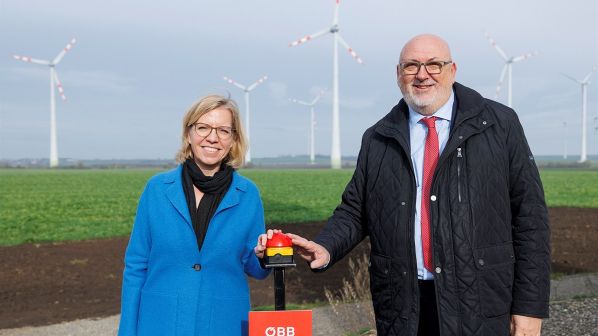 AUSTRIAN Federal Railways (ÖBB) has built what it says is the world’s first wind turbine designed to generate traction current for train operation.

The turbine is located at Höflein in the Bruck/Leitha district of Lower Austria and has an output of around 3MW, which is supplied directly to the railway network’s 15kV 16.7Hz overhead electrification system, and can meet the demand for energy for around 1400 train journeys a year on the Vienna - Salzburg route.

The total cost of the project is around €6m.

The tip height, the height from the base of the turbine to the highest point of rotation of the turbine blades of the Höflein wind turbine, is approximately 200m, while the diameter of the rotor itself is 112m.

The project is supporting ÖBB’s aim to generate 80% of its own power from sustainable sources up from 60% at present while also avoiding the need for new electricity supply lines.

“This is a major innovative milestone for the green future of mobility and the next step in our energy strategy towards more self-sufficiency and independence,” says ÖBB CEO, Mr Andreas Matthä.

There have also been developments in use of solar power to generate power for traction. In 2015, ÖBB put the world's first 16.7 Hz traction current solar power plant into operation in Wilfleinsdorf in Lower Austria, having previously piloted power generation with a solar array on a noise protection wall in Tullnerfeld.

Elsewhere in Europe, French Railways (SNCF) has signed a partnership contract with domestic solar arrays installation and maintenance specialist Tenergie  for the development of more than 100 solar power plants on property which the railway owns.

The partnership will allow the installation of around 180,000 square metres of solar panels on awnings above the carparks of 119 stations selected by Tenergie. As well as generating electricity from their solar panels, the installation of these awnings will contribute to passengers’ comfort and well-being by providing protection from bad weather or from very warm temperatures.

SNCF says the collaboration will help SNCF Stations and Connections to massively increase the renewable energy capacity of its properties when this first wave of solar power plants comes into service by the end of 2024. The accumulated power from these 199 sites represents more than 30 MWp (megawatts peak) - the equivalent of 15% of the annual electricity consumption of 3000 French railway stations or the annual consumption of around 7500 households.

Meanwhile, German Rail (DB) has made the decision to convert lighting at thousands of its railway stations to climate-friendly LEDs or other energy-efficient light sources. The railway will convert thousands of platform lamps, illuminated signs or display boards. In the last five years 1600 stations have already had their conventional lighting replaced with LEDs, with the initial focus having been on large stations such as Essen, Cologne and Berlin-Spandau.

However, in the last 11 months the effort has shifted to medium-sized and small stations with service technicians working on 750 stations so far this year, and with work on a total of more than 1000 stations due to be completed before the end of 2022.

“This year, we are once again taking a big step forward when it comes to energy-saving lighting,” says DB stations and service CEO, Mr Bernd Koch. “By the end of the year, almost half of our train stations will have energy-efficient lighting. At every station that we build or renovate, we always use climate-friendly LED technology. This saves both electricity and CO2. And it shows once again that we are not only climate-friendly on the rails, but also in our stations.”