Sharing of research and development to aid development of safety standards. KRRI is also developing a standardised hydrogen refuelling technology. 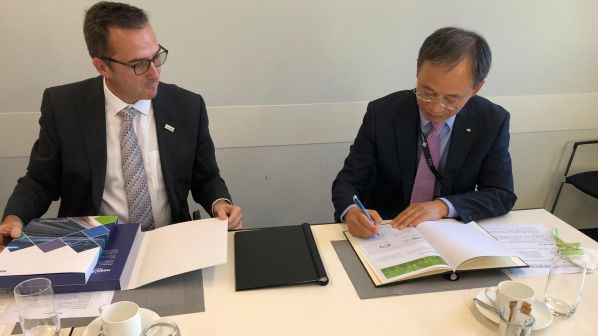 BRITAIN’s Rail Safety and Standards Board (RSSB) has signed a memorandum of understanding (MoU) with the Korean Railroad Research Institute (KRRI) enabling more collaboration in research and development to further improve rail safety.

The MoU was signed at the InnoTrans 2022 transport trade fair in Berlin.

RSSB and KRRI will cooperate on the following areas: research and development of technology, such as data-based safety management; sharing experience and best practice on technical issues, such as safety assessment methods, rail accident investigation, statistics and human and organisational factors; and safety enhancement initiatives, including research on emerging safety issues identified by data analysis.

“RSSB and KRRI bring decades of knowledge, data, analysis and experience to our respective railways,” says RSSB chief commercial officer, Mr Paul McLaughlin “We will now be able to identify opportunities for collaboration, solving shared problems and unlocking potential for the future.

Rapid and smooth refuelling is a key element of hydrogen railway vehicles and the refuelling station, comprises a high-pressure (41.3MPa) hydrogen compressor, a hydrogen storage container with a working pressure of 50MPa, and a charger designed to refuel vehicles at a pressure of 35MPa.

There is no set standard for building hydrogen refuelling facilities for railway vehicles so a draft safety standard had to be developed using a regulatory sandbox allowing hydrogen to be used under certain conditions. The intention is that in the future a technical standard will be established for the railway sector through collection and analysis of empirical data. A safety management committee has been formed with experts from industry, academia and related institutions for this purpose.