Contract with Appenzell Railway will represent “valuable pioneering work” for rail digitalisation around the world, according to Stadler. 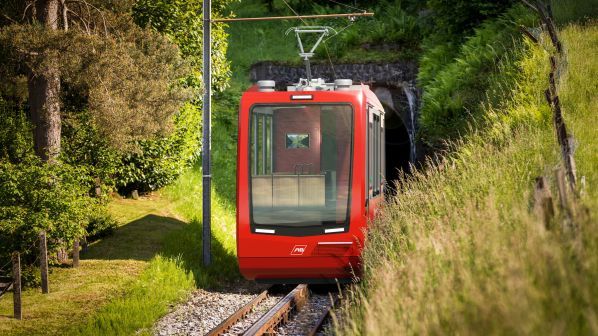 How the fully automated Stadler rack-and-pinion vehicle for AB will look when it enters service on the Rheineck - Walzenhausen rail link.
Photo Credit: Stadler

THE Appenzell Railway (AB) has signed a contract with Stadler for the manufacture and delivery of a vehicle for the Rheineck - Walzenhausen rail link that the companies say will be the world’s first fully automated overland adhesion/rack-and-pinion rail vehicle.

The train currently used by AB on the 1200mm gauge, 1.9km long Rheineck - Walzenhausen line has been in service for over 64 years.

The contract also includes equipping the new vehicle with CBTC - the first time that Stadler will equip a mountain railway vehicle with the system.

Stadler is implementing CBTC at GoA4, the highest level of automation. This will make it possible to operate the train with no crew members on board - instead AB staff in the railway’s operations centre will be able to intervene if needed by remote control.

In addition, as the Rheineck - Walzenhausen line vehicle will be a fully automated train running in an open system in free-field conditions, the CBTC system employed must take over the monitoring of the track and detection of any potential obstacles. This contrasts with closed systems where fully automated CBTC is typically deployed where the risk of obstacles on the line can be safely excluded.

Commissioning of the new train is scheduled for 2026.

“The implementation of automated and driverless operation on the Rheineck - Walzenhausen line is a milestone in the digitalisation of rail operations,” says head of Stadler’s signalling division, Mr Marc Trippel. “The project will represent valuable pioneering work for automated rail transport on inter-city routes. Railway digitalisations projects around the world will benefit as a result.”