PANDROL has developed an Autoseal mould, which eliminates the need for manual sealing of rail aluminothermic welds. 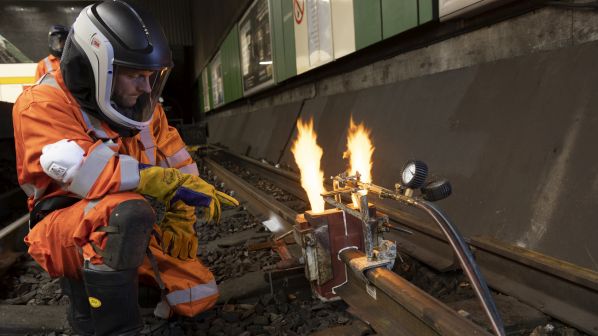 The Pandrol mould can save up to five minutes per weld, resulting in a shorter possession time.

Since the invention of rail aluminothermic welding at the start of the last century, the process has involved sealing the moulds to the rail ends to avoid metal leaks. This is done manually with paste or sand and is a time-consuming job requiring skill and precision.

The innovative Autoseal mould comes with a built-in insulation joint, which expands during pre-heating to create a tight seal. Pandrol says tests have shown that Autoseal is more reliable than conventional luting, particularly when used in cold weather and tight spaces.

The Pandrol mould can save up to five minutes per weld, resulting in a shorter possession time. The system is also more ergonomic, resulting in less stress and kneeling for the welder. The automatic solution weighs less than 200g, compared with 5kg for the traditional method using sand.

The Autoseal mould is also more environmentally friendly, as it reduces the amount of plastic waste and saves on energy for transport.