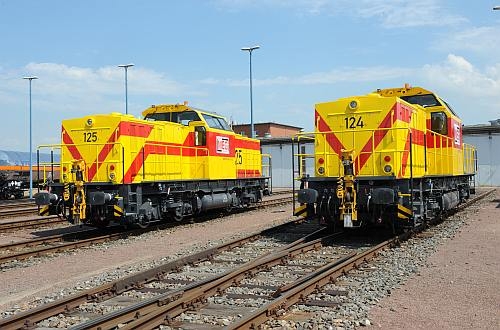 The V100 B-B locomotives have been rebuilt, modernised and equipped with batteries by Alstom Locomotive Services at its Stendal workshop in Saxony-Anhalt. In normal operations the locomotive takes the power from the batteries, which are charged by a 250kW diesel generator, although the generator can also be used directly for traction when required. The maximum output of the locomotive is 600kW.

Alstom says the locomotives offer fuel savings of up to 40% and a reduction of up to 60% in CO2 emissions.

MEG will lease the locomotives from Alstom for six years, but has an option to acquire them outright in 2018. A fifth hybrid locomotive has been ordered by MEG and is due to be delivered at the end of the year.

The CEO of DB Schenker Rail Dr Alexander Hedderich stressed that DB Schenker Rail is an enthusiastic supporter of environmentally-friendly technologies, and that MEG is ideally placed to evaluate the use of hybrid locomotives. One locomotive will initially be tested by the port of Magdeburg.

The locomotives are equipped with the Alstom's Traintracer remote condition monitoring system, and nose-mounted cameras to improve visibility during shunting.