BNSF and Wabtec to trial battery-electric locomotive in 2020

NORTH American Class 1 railway BNSF and Wabtec have announced plans to test a mainline battery-electric locomotive in 2020, as part of a $US 45m project. 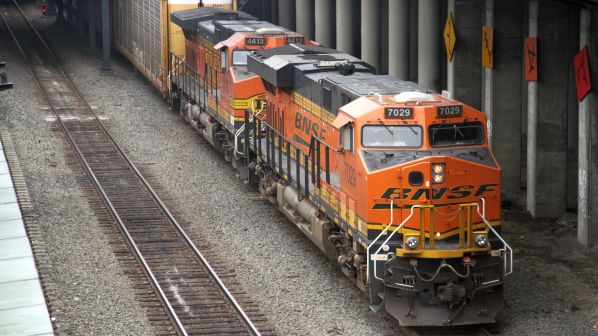 The consist will operate on the 560km Stockton - Barstow line in California.
Photo Credit: Keith Fender

Launched in 2018, the project aims to develop a 100% battery-electric locomotive capable of operating in multiple with a conventional diesel locomotive to create a hybrid consist. The project is being supported by a $US 22.6m grant from the California Air Resources Board as part of its Zero and Near Zero-Emission Freight Facilities programme.

The test will see the consist operate on the 560km Stockton - Barstow line in California.

While BNSF and Wabtec have previously tested a battery-electric shunting locomotive, this will be the companies’ first test of a hybrid mainline freight locomotive.

When in the yard, the diesel locomotives will shut down or idle while the battery provides traction, reducing noise and emissions. During normal operation, the consist will draw on power from the battery locomotive to cut diesel consumption, reducing costs.

BNSF and Wabtec say they will continue to develop the system over the coming years, as it will take time to develop an all battery-electric fleet.

“What’s different about today’s batteries is that they are significantly more powerful than before, and manufacturers have improved battery quality, reliability and technology so we’re able to test their power for our road locomotives,” said BNSF’s senior manager, emerging technologies, Mr Michael Cleveland.

“It certainly has the potential to be a game-changer, especially as the technology continues to mature,” said Wabtec senior product manager for North American locomotives, Mr Dan McNair. “Our demonstration project in California with BNSF will give us tremendous insight into the capabilities of battery power, as well as the best and safest operational methods of leveraging the technology. Smart utilisation of the batteries with diesel power can provide multiple operational benefits, and I expect the proliferation of battery locomotives will happen over the next decade.”

The prototype locomotive will be equipped with a lithium-ion energy storage unit with around 20,000 cells containing a combination of nickel, manganese and cobalt.

Before the pilot can begin, a battery charger will need to be designed and installed at BNSF’s Mormon Yard in Stockton later this year. While the battery charging station will provide an initial charge, the new locomotive will be designed to provide regenerative power under braking to extend its range.

The battery-electric locomotives will also use train energy management software optimise the use of battery power based on the route profile.