Bombardier to assemble locomotives for EMD in India for export

IRJ at InnoTrans 2012: Bombardier has reached agreement with EMD to assemble diesel-electric locomotives at its facility in Savli, India for export to southeast Asia. 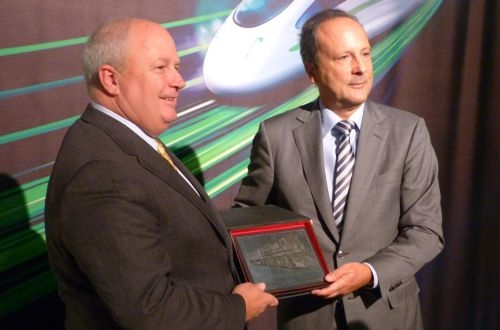 The locomotives will be primarily used for hauling freight trains. The deal builds on a similar collaboration between the two manufacturers in Mexico.

Bombardier will assemble the EMD-designed locomotives in India and supply some components including bogies and underframes, while EMD will be responsible for engineering, quality control and product performance.

"This allows us to produce a world-class product at a competitive price," said Mr Billy Ainsworth, president and CEO of EMD. "In September 2011 we announced the opening of a facility in Patli, India, for locomotive traction control systems, and we want to continue to invest in the region."

"India is central to our growth strategy," said Mr André Navarri, president and COO of Bombardier Transportation. "We have no intention to enter the Indian diesel locomotive market as it is already well served by EMD. However, the Indian government plans to launch a tender in the future for the manufacture of electric locomotives as a PPP project, and we will definitely bid for that."