DB Cargo has awarded Siemens a framework contract worth more than €1bn for up to 400 bi-mode electro-diesel locomotives, including an initial order for 100 locomotives. 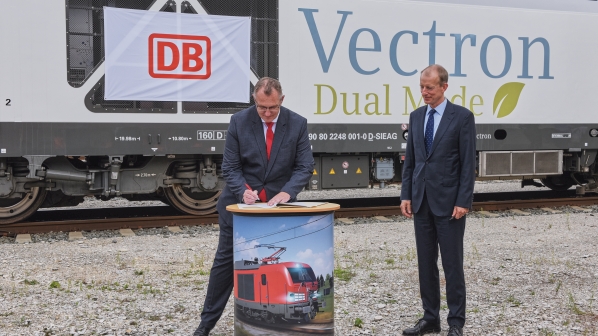 The Vectron Dual Mode locomotives will be delivered with specific adaptations for a range of applications, with delivery of the first 100 series 248 locomotives due to begin delivery in 2023.

The 84-tonne Bo-Bo locomotives will have an output of 2.2MW when operating in electric mode and 950kW under diesel power, with a starting tractive effort of 300kN under both modes.

The 20.5m-long units, which will be equipped with a 1500-litre diesel tank, will have a maximum speed of 120km/h. The locomotives will be able to operate on lines fitted with Germany’s PZB signalling system and ETCS from 2025.

DB Cargo says diesel locomotives are still required due to the lack of electrification on the first and last mile. The operator says the bi-mode capability will reduce fuel consumption by eight million litres and CO2 emissions by 17,000 tonnes each year.

DB Cargo says its goal is to equip around 70% of its diesel locomotives with innovative traction systems by 2030.

“We will grow and rejuvenate our fleet for our customers with a modern, powerful locomotive,” says Mr Ralf Günter Kloß, DB Cargo head of production. “On the other hand, we are underpinning the environmental friendliness of rail.”

“With the Vectron Dual Mode, DB Cargo is investing in future-oriented, sustainable and economic rail freight transport,” says Siemens Rolling Stock CEO, Mr Albrecht Neumann. “As an alternative to the conventional diesel locomotive, the Vectron Dual Mode offers the best of two worlds: on electrified sections of the line, it operates purely electrically to save fuel and reduce maintenance costs. On sections without overhead lines, it is possible to switch over to diesel operation without changing locomotives.”