The locomotives all feature hybrid technology. 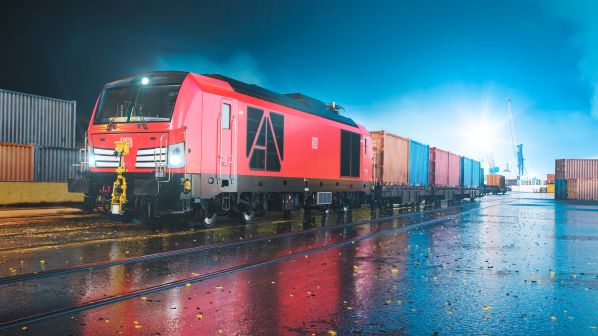 The locomotives have been ordered from three manufacturers and will be used for mainline and shunting operation.

CRRC subsidiary Vossloh Locomotives will supply 50 hybrid shunting locomotives from 2024 following a Europe-wide tender. DB says the new units are designed as plug-in hybrids and are also equipped with a diesel engine featuring an exhaust cleaning system. The drive systems are modular in design and can be easily replaced as the technology develops.

The federal government is supporting the introduction of the technology by providing €15m through the Federal Ministry of Digital Affairs and Transport’s directive on the promotion of alternative drives in rail transport.

DB Cargo has also ordered 50 Vectron Dual Mode locomotives from Siemens Mobility, exercising an option from an order for 100 locomotives signed in 2020. DB Cargo will use 46 of the new locomotives, while DB Railway Construction Group will use the remaining four. Delivery will begin in 2026, with the locomotives to be manufactured at Siemens Mobility’s plant in Munich-Allach.

“On electrified sections of their routes, the Vectron Dual Mode will operate in a purely electric mode, and on non-electrified sections, it can switch to conventional operation and eliminate the need to change locomotives,” says Mr Albrecht Neumann, CEO rolling stock at Siemens Mobility. “This will reduce CO2 emissions, lower maintenance costs, and help DB implement more sustainable supply chains.”

Toshiba will also supply 100 HDB 800 hybrid shunting locomotives, which will be manufactured in Rostock. The first units are due to be delivered in 2024.

“We are investing in our locomotive fleet because we are going to grow,” says DB board member for freight transport and head of DB Cargo, Dr Sigrid Nikutta. “With state-of-the-art technology, we are helping to achieve the climate targets in transport. Our modernisation programme can save around 14 million litres of diesel per year.”

“The new locomotives not only ensure that freight railways become even more climate-friendly, but also that operations run much more efficiently and thus more attractively,” says parliamentary state secretary and federal government commissioner for rail transport, Mr Michael Theurer. “Thanks to technical advancements, even the heaviest loads can now be moved on the last mile or in shunting operations without having to replace personnel and technology. With modern technology and green power, we create clean supply chains.”