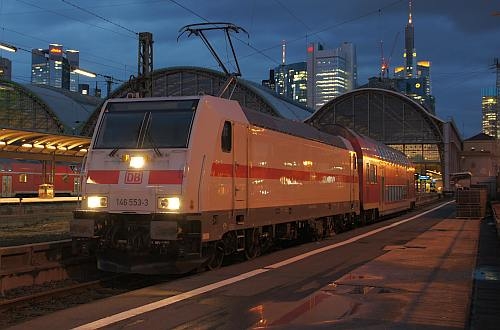 DB placed an order for 27 of the 5.6MW Traxx locomotives in February 2011, together with 137 double-deck coaches in a deal worth around €362m. The coaches are the first double-deck vehicles acquired by DB for long-distance use, and will be used on routes where line speeds rarely exceed 160km/h.

The locomotive is currently undergoing trials with a DB Regio driving trailer and is one of five pre-series units being supplied to DB ahead of the main build. The locomotives are being assembled at Bombardier's Kassel plant, while the coaches are being built at Görlitz with bogies from Siegen.

Bombardier says the long-distance variant of the class 146 is equipped with additional communication features which are needed to support the improved passenger facilities of the long-distance coaches. These include Wire Train Bus (WTB) based functions such as a new passenger information system.

The locomotives and coaches are due to enter service from December.