GERMAN Rail (DB) has signed a framework agreement with CRRC Zhuzhou for 20 “AZLok” hybrid shunting locomotives to be used by infrastructure manager DB Netz, possibly as maintenance and emergency vehicles, the first time the Chinese company has exported to Germany. An initial batch of four locomotives has been ordered under the agreement signed in Berlin on June 20. 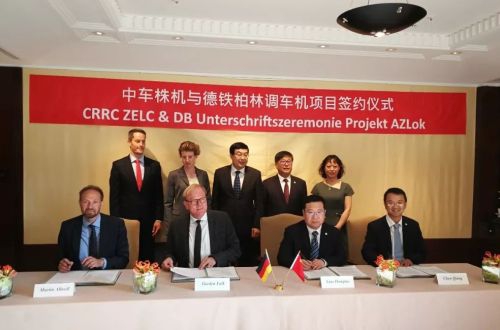 The tender for the project called for small-profile shunting locomotives for use in tunnels, including the Frankfurt City Tunnel. It also required the trains to be fitted with PZB and ZBS, the train control system of the Berlin S-Bahn, as well as come pre-installed with ETCS.

CRRC says the new locomotive, which is designed to meet European Technical Specifications for Interoperability (TSIs) standard and the German Federal Railway Authority (EBA) network access requirements, will use a combination of third-rail, diesel and a lithium-titanate battery hybrid electric transmission to generate 750kW and give the locomotive a maximum speed of 100km/h.

The diesel engine can be turned off and battery power used when the locomotive is idling, which CRRC says can save more than 30% more energy compared to similar sized engines. The lithium-titanate battery can recycle more than 80% of regenerative braking energy, and has a cycle life 10 times longer than that of nickel-cadmium batteries.

The battery can be used as a power source for zero-emissions in sensitive areas. The locomotive will be equipped with a wireless data transmission system, which can communicate the locomotive’s operating status and fault information to the ground management system in real time.