While technically possible, the use of alternative fuels has become more economical than the conversions. 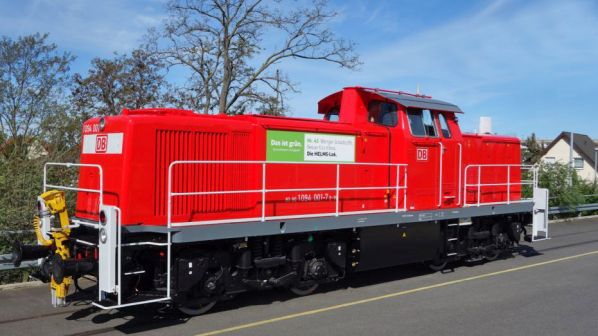 Two DB class 294 locomotives were rebuilt to the Helms specification at DB’s Cottbus site between 2017 and 2019.
Photo Credit: DB

GERMAN Rail (DB) has confirmed to IRJ that it has ended its Hybrid Electronic Mechanical Shunter (Helms) programme to convert 1970s four-axle class 294/295 diesel trip locomotives to a new diesel/battery hybrid electro-mechanical configuration. The Helms project began in 2015 and was first announced at InnoTrans in 2016. Helms was promoted by DB as part of a major investment in the Cottbus region as recently as late 2020.

DB originally planned the conversion of more than 300 diesel-hydraulic class 294/295 locomotives built in the 1970s to the new Helms configuration as it believed the planned conversion would be more economical than buying new locomotives. DB also expected the conversion to extend the working lives of the locomotives by between 16 and 20 years whilst also reducing fuel consumption and emissions.

The Helms design, developed by DB Systemtechnik with Toshiba and Henschel, involved a complex mix of direct diesel-mechanical transmission alongside electric traction using lithium-ion batteries, or a combination of both. Regenerative braking was also fitted.

To convert the engine output into direct mechanical power for propulsion as well as generating electricity to be stored in the battery system, Henschel had developed a 3.2 tonne “planetary gearbox” fitted with 20 gears, 46 bearings and 50 litres of lubricating oil. This was connected to a generator and two traction motors supplied by Toshiba, which were in turn supplied with electricity via a Toshiba power traction convertor system. Toshiba supplied its SCiB lithium titanium oxide batteries for the project, which were proven in service in 25 type HD300 locomotives used by JR Freight in Japan.

Two DB class 294 locomotives were rebuilt to the Helms specification at DB’s Cottbus site between 2017 and 2019. The locomotives had been upgraded with remote control equipment in the 1990s and refitted with MTU 4000 8B engines between 2003 and 2005, with these engines and remote-control equipment retained as part of the conversion.

DB says that while the Helms project showed it is technically possible to convert diesel locomotives to hybrid drives, there have also been many technological advances in alternative fuels in recent years. Continued operation of the existing diesel fleet with alternative fuels such as biodiesel is “significantly more economical” as well as faster and easier than converting the locomotives to the Helms configuration.

DB announced the creation of 1200 new jobs at the Cottbus facility in September 2020 as part of federal government plans to restructure the regional economy, which also included the construction of a new facility for the conversion and maintenance of diesel locomotives to hybrid power sources and a hybrid traction research centre. DB has confirmed the site will still be expanded to become the DB competence centre for hybrid drives.