AN Alstom Prima II locomotive was tested in the Channel Tunnel on the night of September 29-30 in what EuroTunnel says was a step to introducing standard locomotives on railfreight services between Britain and continental Europe. 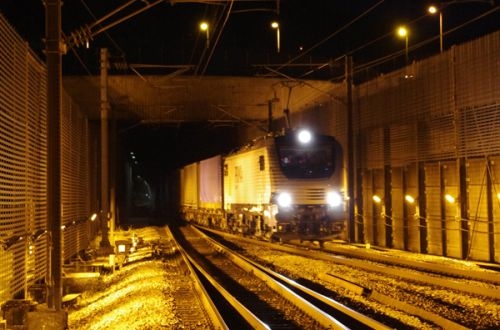 Eurotunnel secured Technical Specifications for Interoperability (TSI) for its freight trains in July 2012 which supersedes previous rules which stated that only locomotives built specifically for operation in the Channel Tunnel can be used. With its current fleet of Class 92 locomotives not accepted by French Rail Network (RFF), Eurotunnel sought the rule change to encourage open-access use of the tunnel for railfreight.

The Prima II locomotive in standard configuration and hauling wagons with a total weight of 950 tonnes entered the tunnel via the French portal at 22.00. Eurotunnel reported that a series of traction, braking and pantograph tests were carried out to check the locomotive's compatibility with the tunnel's system and safety standards. The locomotive exited the tunnel at Folkestone at approximately 03.00 and after several more tests on the return journey, was back in France at 06.00.

"Gaining authorisation for new rolling stock is an essential part in the development of the open-access approach implemented by Eurotunnel," says Mr Jacques Gounon, Eurotunnel chairman and CEO.