ANTOFAGASTA and Bolivia Railway (FCAB) has received and begun operation with seven EMD GT42AC locomotives, marking the beginning of its fleet renewal which is set to continue in 2019 with 11 additional locomotives on order, including five C23EMP single-cab ac/dc diesel-electric locomotives from GE Transportation. 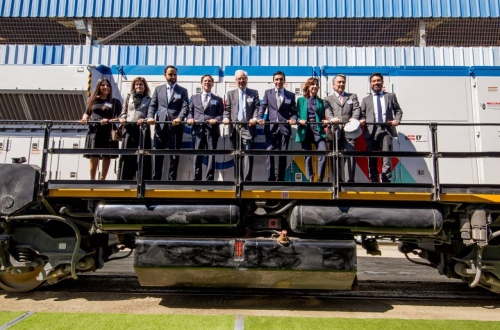 FCAB, which is owned by Antofagasta and transports more than 6 million tonnes of freight a year, says it is investing $US 60m in locomotives with better technology, more ergonomic cabs and a lower environmental impact, including fuel savings and reduced CO2 emissions compared with its current fleet.

To prepare for the arrival of the new locomotives, 15 staff travelled to the EMD factory in the United States to receive training on maintenance and operation. FCAB has also invested $US 12m in track renewal.

“The Antofagasta Railway is and will remain an undisputed link for the competitiveness of regional mining,” says FCAB managing director, Mr Mauricio Ortiz. “That is why the acquisition of new locomotives, wagons and containers will allow us to enhance our transport capacity, the safety of operations and people, and respect for the environment.

“We recently reached an agreement that involves transporting more than 1 million tonnes a year with a new customer. Thus, with the confidence of our shareholders, customers and thanks to the capacity of our engineers, maintainers and operators, we plan to transport close to 8 million tonnes at the beginning of the next decade.”