AMTRAK staged a ceremony at Philadelphia's 30th Street station on February 6 in the presence of US vice-president Mr Joe Biden and US transportation secretary Mr Anthony Foxx to mark the entry into service of the first of 70 locomotives being supplied by Siemens. 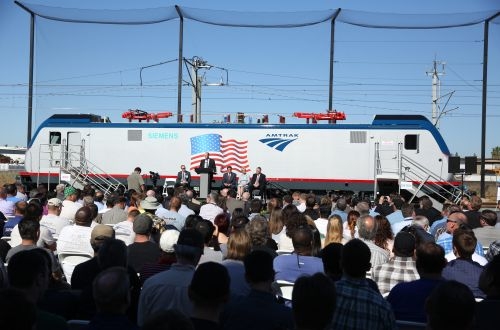 The 200km/h electric locomotives will haul passenger trains on Amtrak's northeast corridor linking Boston, New York and Washington DC. Siemens won the $US 466m contract in October 2010 and the locomotives are being assembled at its plant in Sacramento.

The Amtrak Cities Sprinter, which is the first locomotive to be produced by Siemens in the United States, is based on the company's Eurosprinter and more-recent Vectron locomotives. The Amtrak units have regenerative braking, and when the fleet is fully deployed could generate up to 3 billion kWh of energy. Siemens says that at about 10 cents/kWh, this could equate to around $US 300m worth of electricity being returned for use by other trains.

The locomotives have a maximum output of 6.4MW and are equipped to operate on three voltages: 25kV, 12.5kV and 12kV. They also have a microprocessor system which can diagnose technical faults, take corrective action, and inform the driver.