THE first of 10 diesel-electric locomotives being supplied to All Aboard Florida for its new Brightline inter-city service in Florida has completed initial track testing at the Siemens plant in Sacramento, California, and moved for the first time under its own power. 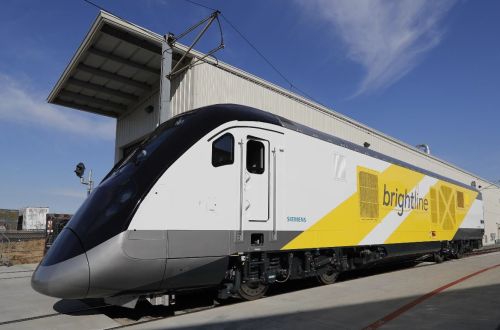 The initial static and dynamic testing, which took three weeks to complete, covered about 45 areas including functional tests of the air and brake systems, software for all systems, fire detection, audible warning devices, communications systems, and empty and fully-loaded weight verification.

As a result, All Aboard Florida has approved production for all the locomotives currently being built by Siemens. “The operation of the locomotive and its passing of the initial track testing has demonstrated Siemens’ engineering expertise and given us a high degree of confidence that the Brightline service will be exceptionally reliable,” says Mr Gene Skoropowski, Brightline’s senior vice-president of railroad operations.

The 200km/h locomotives are EPA Tier 4 compliant and are based on Siemens’ Charger design, but only have a cab at one end with a streamlined nose. Each 2983kW locomotive has a 16-cylinder Cummins QSK95 engine and an axleload of 29.8 tonnes.

Siemens will also supply the coaches for the new trains, each of which will initially consist of a locomotive at each end with four coaches in between. It is planned to increase the number of coaches per train to seven as traffic builds up to double the size of the fleet.

The first train is expected to be delivered to the Brightline maintenance facility in West Palm Beach later this year. Services between Miami, Fort Lauderdale and West Palm Beach are due to start in mid-2017. Brightline will then be extended north to Orlando.