THE first GE Transportation TE33A Evolution Series locomotive for Ukrainian Railways (UZ) was unloaded from a ship at the Black Sea port of Chornomorsk on September 11 after completing its voyage from the United States. 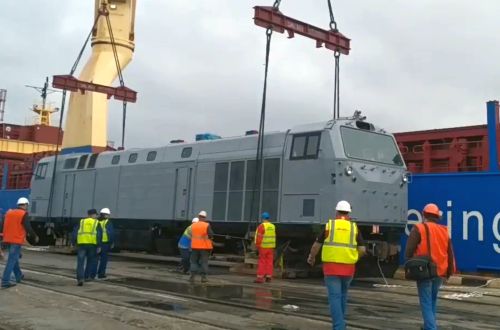 UZ awarded GE a $US 1bn contract in February to build an initial batch of 30 complete TE33As, with 195 units supplied as kits for assembly in Ukraine. The 15-year deal also includes modernisation of 75 existing double-unit locomotives and the provision of fleet maintenance services.

Assembly of the first batch of TE33As is taking place at GE’s plant in Erie, Pennsylvania. UZ says a second locomotive left the US on September 7 and is due to arrive in Ukraine on September 25.

The 120km/h six-axle diesel-electric locomotives are equipped with a 12-cylinder Evolution Series engine providing a maximum output of 3.36MW.