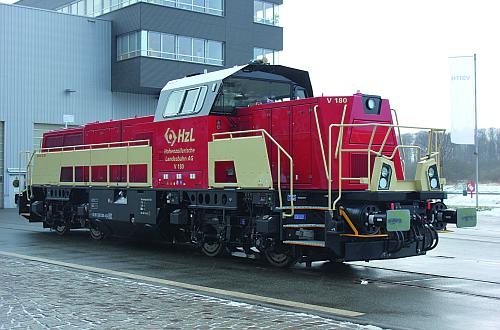 Voith says it has demonstrated to the EBA in recent weeks that the 1.8MW locomotives will not suffer overheating in the axle shaft, and following the delivery of further technical evidence by the manufacturer, the EBA has lifted the restriction which limited their use to 70,000km per year.

Eleven Gravita 15L BB locomotives, classified class 265, have been supplied DB Schenker for operation on freight services in the Ruhr area, while Hohenzollern Railways (HzL) took delivery of one locomotive (pictured) in January, which will be used on Holcim shale oil trains from Dotternhausen in Baden-Württemberg to Eclépens and Untervaz in Switzerland. Two 15L BB units have also been supplied to leasing company Northrail.

The smaller Gravita 10 BB variant was granted unlimited approval by the EBA in 2010 and is now in widespread use across Germany.