THE noise over the India government’s reported move to write-off the Rs 175bn ($US 2.8bn) contract for 1000 diesel locomotives it signed last November with GE died down on September 28, when railways minister Mr Piyush Goyal asserted that the deal was “on track.” 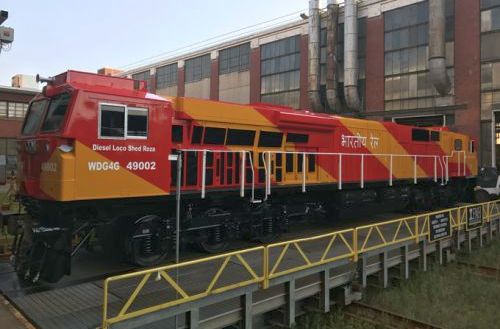 “I have held fruitful discussions with the GE functionaries, sudden changes in the contract conditions will not come about,” Goyal says.

At a meeting with Railway Board members last week, Goyal reportedly instructed officials to work out ways to reverse the deal to establish a locomotive production facility at Marhoura in the state of Bihar to enable IR to focus on its ambitious electrification programme, which is expected to drastically reduce the need for diesel traction.

Billed as India’s biggest Foreign Direct Investment (FDI) project, the Marhoura deal entailed a buy back arrangement of the 3.36 and 4.47MW locomotives that will roll out of the factory. These are scheduled to be delivered at the rate of 100 locomotives per year after the factory begins production in 2022.

In a statement on September 26 GE said that if the Indian government moves forward with changes to the joint venture between IR and GE, it will “undermine one of the most promising infrastructure projects in the country and put future foreign investment at risk”.

“An alteration of this contract will have a serious impact on job creation and skills development and cause the government to incur substantial costs,” GE says. “This will also undermine the government’s signature ‘Make in India’ initiative.”

Through the “Mission Electrification” programme, the new railways minister has set the ambitious target of electrifying 24,000km over the next four years. “This will help slash IR’s annual fuel bill to Rs 80bn from the current level of Rs 160bn and will also help reduce pollution,” Goyal said in his address last week at the Indo-American Chamber of Commerce in Mumbai.

IR currently operates a fleet of around 5500 diesel locomotives. It has been argued that even if three-quarters of the fleet is rendered surplus by electrification, IR could still retain around 1500 units for operation on secondary lines.