INDIAN Railways (IR) signed two contracts with a combined value of around Rs 450bn ($US 6.8bn) with Alstom and GE Transportation on November 30 for a total of 1800 freight locomotives, most of which will be assembled at purpose-built plants in the north-eastern state of Bihar as part of the government's Make in India initiative. 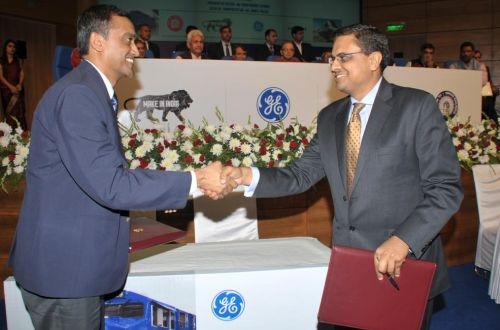 IR announced the two suppliers as preferred bidders earlier this month following a lengthy procurement process. Both orders will be delivered through joint ventures in which IR will hold a 26% stake subject to a maximum investment of Rs 1bn in each company.

GE Transportation has been awarded a Rs 220bn contract through GE Global Sourcing India to supply and maintain at least 700 3.36MW and 300 4.47MW Evolution Series diesel-electric locomotives. IR has allocated a 91.5 hectare site at Mahoura for the assembly plant, which is due to begin production within three years and will roll out 100 units per year.

Alstom will supply and maintain 800 double-unit Prima electric locomotives (pictured) under a Rs 230bn contract which includes 13 years' maintenance for the first 250 units and four years for the following 250. All except the first five locomotives will be assembled at a new plant at Madhepura under a joint venture with IR. Delivery of the 120km/h 8.9MW units will take place between 2018 and 2028 and Alstom will maintain the fleet at purpose-built depots at Saharanpur in Uttar Pradesh and Nagpur in Maharashtra.