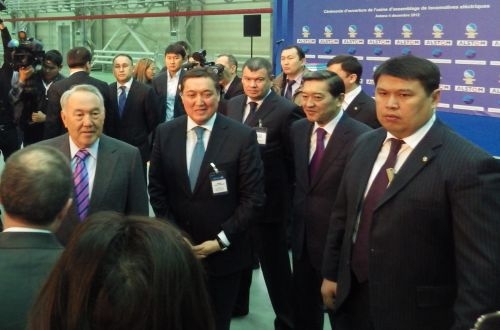 President Nursaltan Nazarbayev (left) next to Mr Askar Mamin, president of KTZ, at the opening in Astana..

EKZ, a joint venture of Alstom (25%), Transmashholding (25%) and Kazakhstan Railways (KTZ) (50%) will produce electric passenger and freight locomotives at the plant, beginning with assembly of 15 KZ8A eight-axle freight units produced at Alstom's factory in Belfort, France in January. Ten freight and 20 KZ4AT four-axle passenger units from a €1.5bn order placed by KTZ in 2010 for 295 locomotives are also being built in Belfort while the remaining 175 freight and 75 passenger locomotives will be manufactured in Kazakhstan.

The consortium has invested €50m in the 31,000m2 Astana plant which has taken a year to build and has capacity to produce 100 sections, or 50 dual-unit locomotives per year. The units will be tested at a new 2km test track which will open in 2013 a short distance from the plant, with certification taking around a month. Alstom expects to produce 60-70 sections per year by 2016-17. Currently 50 people are employed at the site, but this number will rise to 400 by 2015 and 650 by 2017.

Localising production and developing a regional supply chain is a major element of Alstom's strategy for the plant. Local workers will be trained at Belfort and at TMH's plant in Novocherkassk, Russia, in order to make up for a local skills shortage.

The JV also aims to increase the level of local content to 30% by 2016, a further 5% when the Railcomp joint venture with TMH begins producing traction transformers for passenger locomotives at its TRTrans plant in Novocherkassk in 2014, an additional 7% when braking components are produced in Russia in a joint venture with Knorr Bremse, and up to 72% by 2020 when it will provide a localised spare component service.

Alstom CEO Mr Patrick Kron told IRJ in Astana that with Alstom sourcing up to 60% of its content the plant should be reliant on 50-70% of this from local suppliers which he defines as anything manufactured within Russia or the CIS region, in order to be economically sustainable. He says that the company is exploring opportunities to source steel for car bodies from Russia as well as encouraging more of its traditional suppliers to establish their own facilities in Kazakhstan.

"When we decided to develop ourselves in this region we understood that we needed to work with a local player so we might share our expertise with them and they might share theirs with us to the benefit of both parties. This is the reality of what we have to do here." Kron says. "We are trying to attract our key suppliers to establish themselves in this country as well. We want to establish the supply chain where we are, like we have done in China and we are doing in India. This is a big part of what we are trying to do here. We have had some successes and we are looking for more."

Kron added that he anticipates substantial demand for locomotives not just in Kazakhstan but neighbouring CIS countries over the next few years. Much of the region's rolling stock is reaching life expiry while railfreight traffic is expected to increase. He also expects a decision to be reached soon on the Astana light rail project with negotiations continuing with the city and national governments over three proposals. The first line will link the airport with the city and Alstom says it hopes work can start in 2014 in order to complete the project in time for the Expo 2017 which will be held in Astana. "We are hopeful of reaching an agreement on this very soon," Kron said.