The locomotives are the second batch from an order for 11 with CRRC Dalian. 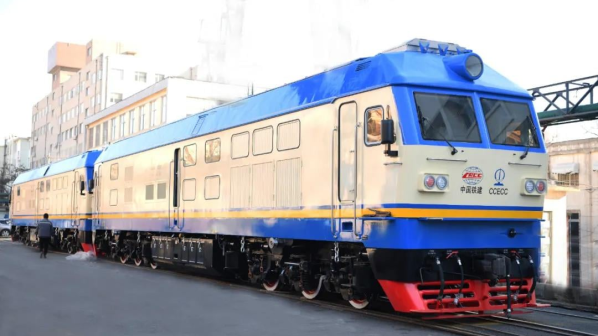 CRRC Dalian has announced that a batch of seven DF4DH diesel locomotives has arrived at the Port of Dalian, China, ahead of export to the United Arab Emirates (UAE).

The batch is the second delivery from the fleet of 11 locomotives ordered by China Civil Engineering Construction (CCEC) in May 2020 for use in the construction of Phase 2 of the Etihad Rail project. The first batch of four locomotives arrived in the UAE on January 19.

The standard-gauge Dongfeng 4 series locomotives have a maximum design speed of 100km/h with a maximum power output of 2.94MW.

The locomotives have been designed for the UAE’s extreme weather conditions, which includes temperatures of up to 50°C, winds and sandstorms. The locomotives also feature optimised air filtration, air-conditioning and cooling systems.

CCEC’s parent company, China Railway Construction Corporation (CRCC) in partnership with Ghantoot Transport & General Contracting, UAE, are currently executing construction of packages B and C of Etihad Rail Phase 2 under a pair of contracts worth $US 1.2bn awarded in June 2019.