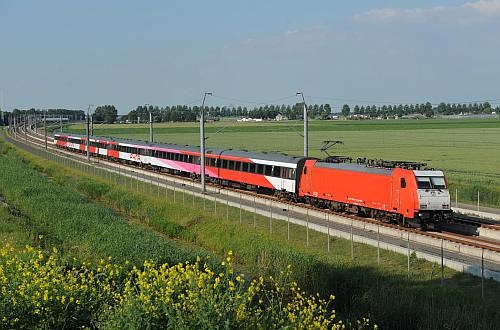 The 160km/h units, which are designated class 186, will take over Intercity Direct (formerly Fyra) services from similar locomotives, which are leased from Alpha Trains.

The new locomotives will be equipped with ETCS Level 2, a prerequisite for operation on HSL South, and deliveries are due to start before the end of 2014. From December 2014 the locomotives will be introduced on Amsterdam – Rotterdam services, and they will also be used on Eindhoven – The Hague services from December 2015. However, they will not be used on cross-border services to Antwerp and Brussels.

The fact that the locomotives are already approved for use in the Netherlands was a key consideration for NS, which has decided to purchase its own fleet because it believes leasing companies will not be able to supply a sufficient number of locomotives of the specific type required in such a short timescale.

The locomotives will operate with refurbished NS ICR coaches.

Bombardier is expected to maintain the new locomotives at Watergraafsmeer depot near Amsterdam, which currently maintains the leased Traxx locomotives used by NS.

NS has been exempted from issuing a Europe-wide tender – normally a legal requirement for a public procurement of this size – due to the urgency of the situation. As no appeals were made against the decision, NS was able to place the order without tendering.