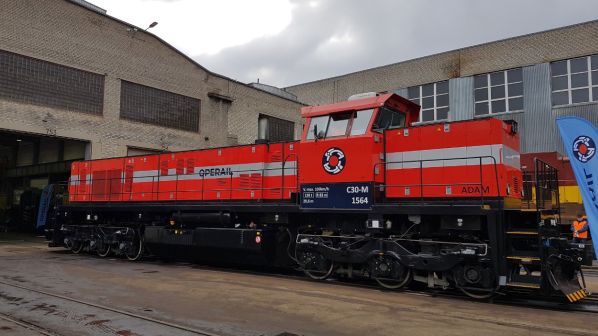 The 1520mm-gauge locomotive was rebuilt from a GE C30-7Ai in collaboration with CZ Loko, Czech Republic, with all work being carried out at the Tapa facility.

Only the frames and bogies of the original locomotive were retained and the C30-M features a new centrally-positioned driver’s cab and a 1.55MW Caterpillar 3512C HD diesel engine.

The 100km/h locomotive weighs 138 tonnes and has an axleload of 23 tonnes.

Operail says the C30-M is designed for shunting but is also suitable for line-haul operation.

Operail says a second and third locomotive are now being rebuilt at Lapa and a contract will be signed soon for the upgrading of a further four units.

As well as the locomotives for its own use, Operail says it is looking for export opportunities for the C30-M.

In 2003, 19 C30-7A locomotives acquired from US Class 1 freight railways were exported to Estonia by private operator Baltic Rail Services. These locomotives became the property of EVR Cargo following the renationalisation of Estonia’s railways in 2007.