IRJ at InnoTrans 2012: PESA, Poland, today revealed its new Gama range of modular locomotives, which will include diesel, electric and dual mode variants. 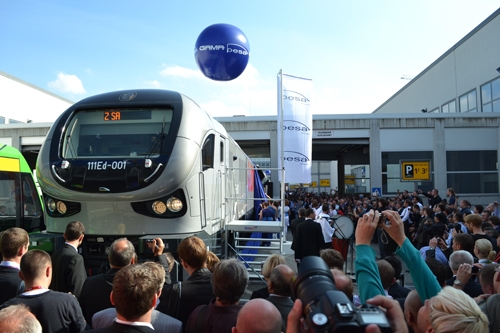 The first locomotive, designated 111Ed, is a 5.6MW 3kV dc Bo-Bo unit equipped with Pesa's Marathon last-mile diesel engine system, which allows the it to operate over limited distances on non-electrified lines. The 160km/h locomotive has a starting tractive effort of 300kN and a maximum speed of 160km/h.

The range will also include a 2.2MW 160km/h diesel locomotive, a 160km/h multi-system model for freight operations, and a 190km7h passenger electric.

The locomotive is certified for operation in Poland and Pesa says it is in discussions with a number of potential customers, including Lotos Kloej in Poland and several German operators.