The locomotive is now undergoing certification for use in Europe. 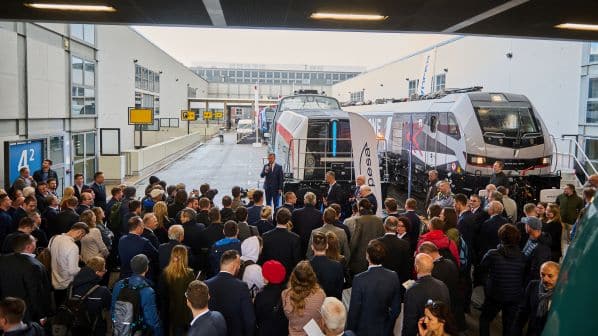 POLISH manufacturer Pesa unveiled its H2 hydrogen-powered shunting locomotive for the first-time outside of Poland at InnoTrans.

Pesa CEO and president, Mr Kryzstof Zdziarski, said that while the locomotive was still a prototype when it was unveiled in Gdansk a year ago, it is now a fully-fledged product that is ready for the market.

The locomotive has a 650kW power output and can operate for 15 hours before requiring refuelling. The certification process for use in Europe is now underway.

During the unveiling ceremony, Pesa and Polish fuel refiner Orlen also signed a cooperation agreement that will enable the locomotive to be sold as a package with a hydrogen refuelling station, which was also unveiled during the event. Orlen would also supply the hydrogen for customers within Europe where possible.

Speaking to IRJ following the unveiling, Zdziarski said there were orders for around 20 locomotives in the pipeline, but these had not yet been signed as Pesa was still working on the price point for the locomotive while customers were still exploring the subsidies that would be available.

“In shunting yards there is no electricity available, so it's either diesel or something else,” Zdziarski says. “People are not buying new diesel locomotives because they don’t want to commit for another 20 or 30 years, so they are saying that when we are ready they will start replacing the old equipment.”

Zdziarski says that instead of completely replacing a fleet of 20 diesel locomotives that may be found at a large port or yard, it is more likely that operators will purchase one or two locomotives with alternative traction to reap some of the tax breaks or benefits, while still waiting for the technology to mature further before replacing the rest of the fleet. However, this would be accelerated if authorities continue to introduce measures that force companies to pay for the emissions they produce.

“If you have to pay for the emissions from your vehicle like we do in power plants, then obviously you either have to pay the fee or you pay a little bit more for fuel, and it costs you the same but you are not polluting,” Zdziarski says, adding that there was more impetus to move early. “Some people care about it, some people less so, but who would have said that electric cars will take over that much as they do now. Five years ago, you thought it was something only very, very rich people could afford. Now there are fleets of company cars that are electric or even hydrogen. In my opinion, it's coming and we should see it coming stronger and stronger.”

Pesa currently has capacity to produce three hydrogen locomotives a year, but this could be scaled up to meet demand. Production of each vehicle is expected to take two years.

A full review of IRJ’s coverage of InnoTrans 2022 will appear in the November issue of IRJ.