THE embattled Passenger Rail Agency of South Africa (Prasa) has presented a business case to parliament to acquire the remaining Afro 4000 and Afro Dual locomotives built by Vossloh Spain (now Stadler Rail Valencia), which were ordered but never delivered after it was discovered they exceeded the loading gauge on part of the country’s network. 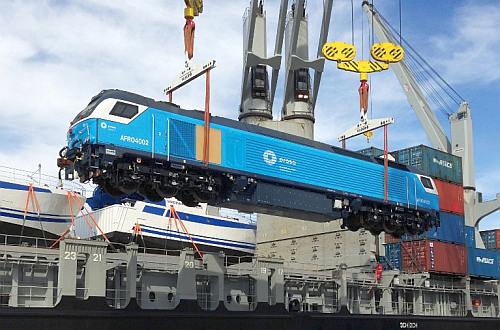 13 Afro 4000 locomotives were delivered to South Africa before legal proceedings to challenge the procurement process were launched.

The controversial Rand 2.5bn ($US 147m) deal, under which Swifambo Rail contracted Vossloh in 2013 to supply 20 Afro 4000 diesel-electric and 50 AfroDual electro-diesel locomotives, ground to a halt in South Africa’s courts in November 2015 following allegations of corruption.

Only 13 Afro 4000 locomotives - a 1067mm-gauge version of the Euro 4000 - were delivered to South Africa before Prasa’s board launched legal proceedings to challenge the procurement process in court on the grounds of collusion during the tendering process.

Prasa, which is desperately short of reliable power to haul its Shosholoza Meyl long-distance passenger trains, is now lobbying to acquire 22 locomotives from Stadler.

The original deal drew national media attention when engineers from state-owned operator Transnet, which shares track with Prasa, discovered that the newly-delivered Afro 4000 locomotives were too high to operate safely under the country’s 3kV electrified network with a minimum roof clearance of just 10mm below the contact wire.

The country’s rail safety regulator banned the locomotives from operating on the 3kV network, pending an investigation. While operation was permitted under Transnet’s 25kV wires, Prasa mothballed the locomotives in 2015 when the court proceedings began.

Prasa, which is now under administration, elected to sell 13 Afro 4000s at auction in an attempt to reduce its financial losses, with private operator Traxtion purchasing seven of them. An auction for the remaining six locomotives was halted pending the outcome of the proposal before parliament.

Prasa has faced further problems with the country’s Metrorail commuter trains that it also operates, which have been crippled by widespread cable theft during South Africa’s hard two-month lockdown. Services are gradually being reintroduced as the country moves to level two restrictions in a bid to save its battered economy.