SINARA Group unveiled a new prototype LNG turbine locomotive at the Expo 1520 exhibition in Shcherbinka, Russia, last week which was developed in partnership with the Russian Railways Research Institute (VNIIZHT). 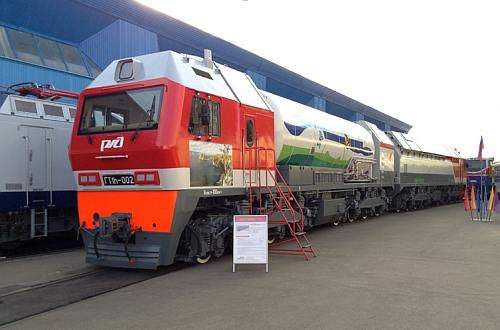 Designated GT1H, the eight-axle dual-unit locomotive weighs 360 tonnes. Instead of a diesel engine the locomotive uses a LNG-powered turbine to power a generator. A transformer on each unit converts the high voltage output of the turbine and the generator to a 500V output for the traction motors and other ancillary systems. The GT1H has a total output of 7.35MW.

Like its predecessor, GT1, which was first developed in 2007 and broke a world record for gas turbine locomotives by hauling a 16,000-tonne 170-wagon train in 2011, the GT1H's turbine and generator operates at up to 6000 RPM. However on the new locomotive the turbine and the generator are designed to operate at 3000 RPM as well as 6000 RPM.

"Lessons learned from the development of GT1 have been incorporated into this new model," says Mr Valeriy Tolstov, Sinara's technical director. "Nonetheless the principle of generating and transferring electrical energy remains the same."

Russia is keen to utilise its abundant supply of natural gas, which is significantly cheaper than diesel, as a fuel source and Mr Valentin Gapanovich, Russian Railways' (RZD) senior vice president and chief engineer, described the project as a "world first" and confirmed that RZD has agreed to purchase 40 of the locomotives.

Tolstov said that the delivery schedule for the locomotives would be finalised once the latest round of testing, which is due to commence in November, is concluded.