Russians to expand natural gas use in rail transport

RUSSIAN Railways (RZD), Gazprom, Transmashholding (TMH) and Sinara signed an agreement on June 17 at the St Petersburg International Economic Forum aimed at increasing the use of natural gas as a fuel for rail transport. 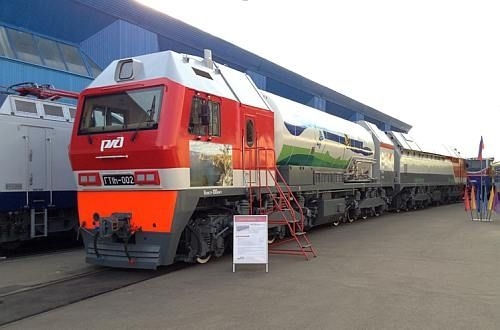 The four organisations intend to synchronise the expansion of natural gas facilities which include fueling points for locomotives, a distribution network and maintenance of natural gas equipment. RZD and Gazprom will agree the best locations for natural gas infrastructure, and RZD will start in the Korotchaevo - Surgut - Voinovka area to enable the operation of 9000-tonne freight trains hauled by natural gas locomotives.

RZD says the benefit of using natural gas is that it is possible to build a high-power locomotive of up to 8.3MW within a relatively small low-weight unit, which can reach 100km/h under maximum design load, compared with other types of gas-turbine locomotives.

Two types of natural-gas locomotives are to be developed. Sinara will build a fleet of GT1h mainline locomotives for use on non-electrified lines in Siberia and the far north of Russia. Sinara is currently certifying a GT1h test gas-turbine locomotive and has prepared a production site for series production. During tests the locomotive hauled a 9000-tonne train for 700km without refuelling.

TMH has built an 880kW type TEM19 liquefied-natural-gas shunting locomotive, which is being tested by Sverdlovsk Railway, and plans to move to series production.