SIEMENS has been awarded a contract to supply 13 1067mm-gauge 25kV heavy-haul electric locomotives to the BHP Billiton Mitsubishi Alliance (BMA), which will be used on coal trains in Queensland from 2014 onwards. 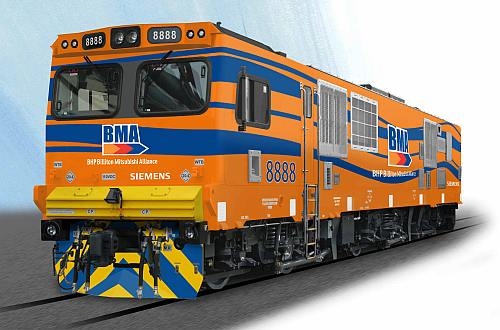 The 4MW AC traction locomotives will be among the most powerful narrow-gauge electric locomotives in the world and will be similar to the 77 Siemens locomotives already in operation with QR National and Pacific National in Queensland.

The fleet will be used on trains from BMA's new coal mines at Caval Ridge and Daunia in the Bowen Basin to the Hay Point export terminal. The two mines are expected to generate rail-borne volumes of around 15 million tonnes per year from 2014.

The locomotives, scheduled for delivery in late 2013, are the first tangible sign that BMA will take advantage of open access provisions to run its own trains in Queensland over QR National lines.