SIEMENS rolled out the first completed ACS-64 Cities Sprinter multi-system electric locomotive for Amtrak at its Sacramento plant in California on May 13. 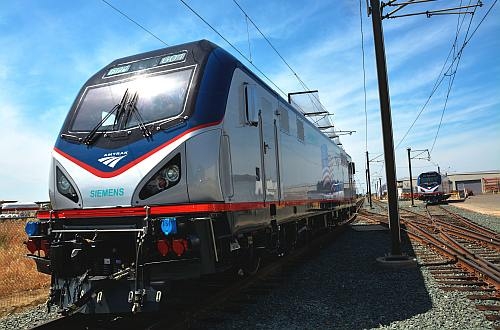 The first units from the $US 466m order for 70 locomotives will undergo trials this summer and are due to enter revenue service in the autumn, augmenting and eventually replacing AEM7 locomotives built between 1978 and 1988.

The 6.4MW Bo-Bo locomotives will operate at up to 200km/h on regional and long-distance services on the Northeast Corridor between Boston, New York and Washington, DC, and up to 177km/h on Keystone Corridor trains between Philadelphia and Harrisburg, Pennsylvania.

The Cities Sprinter is based on Siemens' Eurosprinter and Vectron designs, and meets the latest Federal Railroad Administration safety and crashworthiness standards. The tri-voltage locomotives have a reinforced bodyshell with crumple zones to absorb energy in the event of a collision.