Siemens Vectron approved for use in Germany 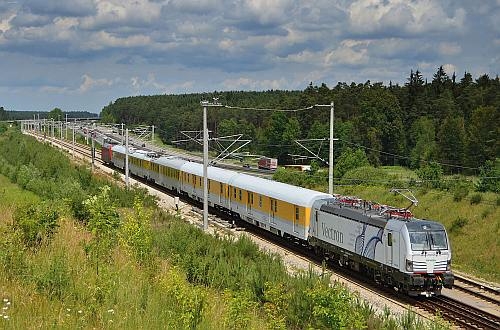 The certification covers the 6.4MW 200km/h dual-system (15kV/25 kV ac) variant, six of which have been ordered by leasing company Railpool for use in Germany and Austria. However, Siemens says other customer-specific versions of the AC multi-system Vectron can be certified by the EBA through a delta review based on the approval of the prototype locomotive.

Last year Vectron became the first locomotive design to meet the European Technical Specification for Interoperability for rolling stock operating on the European high-speed network (TSI HS RST). Siemens says the cross-acceptance certificates gained through the TSI process reduced the amount of testing required by national safety authorities. Additional evidence is required only for compliance with national requirements not covered by the TSI.

Vectron is already approved for operation in Sweden, Romania, and Poland, where Siemens recently won a contract for 23 3kV dc locomotives from DB Schenker Rail Poland.